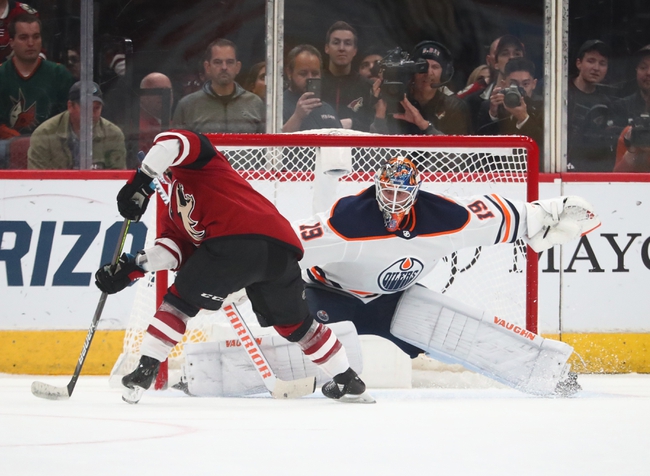 Where to watch: Sportsnet, FS-Arizona+ Stream live sports and exclusive originals on ESPN+. Sign up now!

The Arizona Coyotes and the Edmonton Oilers meet in a Pacific division matchup in NHL action from Rogers Place on Saturday afternoon.

The Arizona Coyotes will look to rebound after a 3-1 loss to Vancouver in their last outing. Christian Dvorak opened the scoring for Arizona just under eight minutes into the game before Vancouver tied the game with just under five minutes to play in the opening period. The Canucks would take the lead with the lone goal of the 2nd period just over four minutes before the intermission and would then ice the win with an empty-netter in the last minute of the game, securing the win and sending Arizona back empty-handed. Adin Hill ended up with the loss, falling to 2-2-1 on the year after allowing two goals on 24 shots faced in the losing effort.

The Edmonton Oilers will look to build on a 4-2 win over Nashville last time out. Ryan Nugent-Hopkins opened the scoring for the Oilers just over nine minutes into the game before the Predators tied the game just 1:41 later and took the lead just under five minutes after that. Leon Draisaitl tied the game at two just 4:01 later and the tie would hold until Josh Archibald broke the deadlock just over nine minutes into the 3rd period. The Predators wold force the issue and try for a game-tying goal, but Draisaitl would lock up the win for Edmonton with his 2nd goal of the game coming on an empty net. Mike Smith got the win to improve to 11-9-3 on the year after stopping 30 of 32 shots faced in the winning effort.

The Coyotes and plus money is tempting given how Arizona has played on the road all year long, but the goaltending situation in the Desert is still sketchy at best while Edmonton has started to figure things out. The Oilers also have to be feeling pretty good, nearing the all-star break in a playoff position despite all of their recent struggles. I just think at home the Oilers will come out firing so I’ll lay the juice with Edmonton at home in this one.