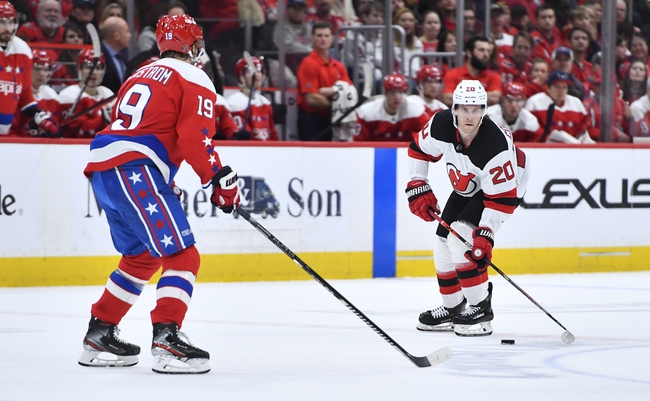 The New Jersey Devils and the Washington Capitals meet in a Metropolitan division matchup in NHL action from Capital One Arena on Thursday night.

The New Jersey Devils will look to rebound from a 7-4 loss to Toronto in their last outing. Toronto took an early 2-0 lead just before the midway point of the opening period before adding a 3rd goal in the dying seconds of the 1st period. Toronto forged ahead 4-0 early in the 2nd period before Blake Coleman got the Devils on the board just before the seven minute mark of the 2nd period. Toronto responded just after the midway point of the middle frame and made it 6-1 early in the 3rd period. Coleman completed his hat trick later in the 3rd with a pair of goals 3:35 apart and P.K. Subban made it interesting at 6-4 with just under two minutes to go, but that’s as close as the Devils got as Toronto iced the win with an empty-netter just :38 later. Louis Domingue took the loss, falling to 3-5-0 on the year after allowing 5 goals on 19 shots faced in the losing effort.

The Washington Capitals will look to build on a 2-0 win over Carolina in their last outing. Alex Ovechkin did all of the damage for the Capitals with a pair of first period goals 5:20 apart as the Capitals would ride that 2-0 lead through the final two periods despite being outshot 10-5 in the 2nd and 17-16 over the final two periods. Ilya Samsonov picked up the win between the pipes for the Capitals, improving his record to 13-2-1 on the year after stopping all 23 shots faced in the winning effort for his 1st shutout of the season.

I get Washington being favored at home here and the Capitals are the better team and maybe the win got Washington back on track. However, I’m not laying this kind of juice with the Capitals who, like the Devils, are playing .500 hockey over their last ten games. New Jersey also beat up on Washington in this same building just a few games ago and also have a win over a pretty good Tampa Bay team right after that. I’ll take a shot with New Jersey and the plus money here.