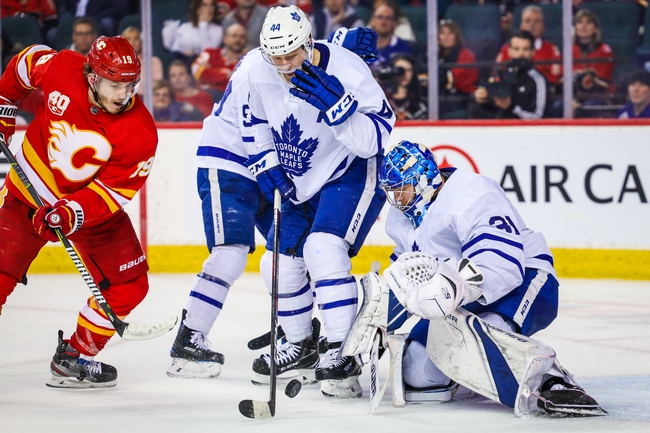 Where to watch: TSN4, SN-West Stream live sports and exclusive originals on ESPN+. Sign up now!

The Calgary Flames and the Toronto Maple Leafs meet in NHL action from the Scotiabank Arena on Thursday night.

The Calgary Flames will look to rebound from a 2-0 loss to Montreal last time out. Montreal took the lead with six and a half minutes to go in the opening period and would carry that lead through the 2nd and into the 3rdwhere the Habs would double the lead just before the midway point of the 3rd period, and despite the Flames outshooting the Canadiens 15-5 in the 3rd period, Calgary wouldn’t break through as Montreal held on for the win. David Rittich took the loss, falling to 18-11-5 on the year after allowing both goals on 37 shots faced in the losing effort.

The Toronto Maple Leafs will look to build on a 7-4 win over the New Jersey Devils in their last outing. John Tavares and Frederik Gauthier pushed the Leafs ahead 2-0 with a pair of goals 3:52 apart early on in the 1stbefore Zach Hyman added a 3rd goal with just a few seconds to go in the 1st. William Nylander pushed the lead to 4-0 2:12 into the 2nd period but New Jersey would get on the board just under five minutes later and Auston Matthews would restore the four-goal lead just after the midway point of the 2nd period. Matthews would add a 2nd goal just before the four-minute mark of the 3rd period but the Devils would cut the lead to 6-4 with three goals in a span of 6:02 in the 3rd. Matthews completed his hat trick on an empty net to slam the door shut with just over a minute to go in the game. Frederik Andersen got the win to improve to 22-8-5 on the year after stopping 25 of 29 shots faced in the winning effort.

The plus money with the Flames is definitely tempting, but the Flames kind of came back down to earth against Montreal, and the Flames haven’t had much luck in Toronto over the last few seasons. The Flames are also on the East Coast where the media coverage is crazy and a lot of questions are focusing on the Zack Kassian/Matthew Tkachuk drama right now, and that’s not a distraction that the Flames need right now. Toronto got back on track against New Jersey and I think the Leafs are always a threat to the scoreboard. I’ll side with Toronto in regulation to get the price down and I’m not sure I feel like chasing the puck line here but I do think the Leafs emerge victorious.