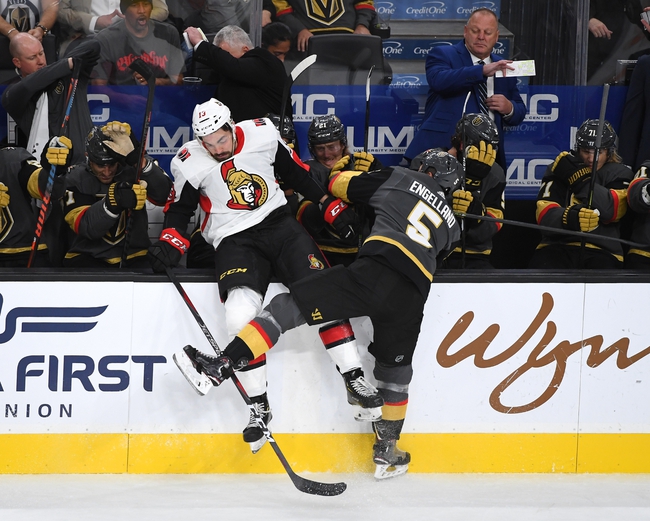 The Vegas Golden Knights and the Ottawa Senators meet in NHL action from the Canadian Tire Center on Thursday night.

The Vegas Golden Knights will be out to snap a four-game losing streak after a 4-2 loss to Buffalo last time out. The game was scoreless through the opening 20 minutes before Tomas Nosek got the Golden Knights in front. Buffalo tied the game just under five minutes later and took the lead in the dying seconds of the 2ndperiod. Reilly Smith tied the game at two just under two minutes into the 3rd but the Sabres would re-take the lead just over six minutes later and would ice the win with an empty-netter in the dying seconds of the 3rdperiod. Marc-Andre Fleury took the loss, falling to 18-11-3 after allowing 3 goals on 25 shots faced in the losing effort.

The Ottawa Senators will be out to snap an eight-game losing streak after a 3-2 overtime loss to Chicago last time out. Connor Brown and Chris Tierney gave the Senators an early 2-0 lead with a pair of goals 3:48 apart in the 1st period and the Sens would hold that lead through the rest of the 1st and most of the 2nd before the Blackhawks pulled one back and tied the game early in the 3rd. The rest of regulation wouldn’t produce a winner, so it was off to overtime where the Blackhawks found a winner in the first minute of the extra frame. Marcus Hogberg took the loss, falling to 1-2-5 on the year after allowing 3 goals on 30 shots faced in the losing effort.

I was one that was really shocked by Vegas’ firing of Gerard Gallant, but it just goes to show you the pressure that there is to win in the league right now and how high the expectations are for Vegas right now. However, as good as Ottawa has played at home, the Senators are still having issues, and while Vegas is having issues of their own, you could see how guilty some of the players felt as they know it was their play that resulted in the coach getting the axe. It’ll be interesting to see if the Knights get up for new coach Peter DeBoer, but I think the Golden Knights come out to make a statement that they’re better than what they’ve showed and play a game for their old coach. I’ll side with Vegas on the puck line here.