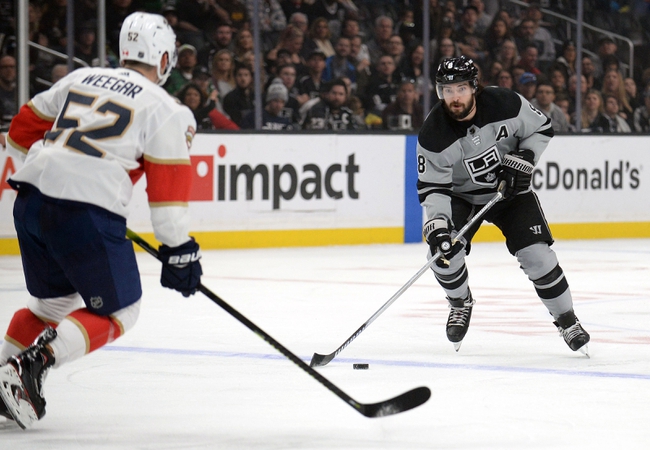 The Los Angeles Kings and the Florida Panthers meet in NHL action from the BB&T Center on Thursday night.

The Los Angeles Kings will look to rebound from back-to-back losses after a 4-3 shootout loss to Tampa Bay last time out. Jeff Carter and Kyle Clifford gave the Kings an early 2-0 lead with a pair of goals 2:34 apart but the Lightning would tie the game would tie the game just after the midway point of the 1st with a pair of goals 1:19 apart. The tie would hold going into the 3rd where Dustin Brown gave Los Angeles the lead with eight minutes to go but the Bolts would tie the game with 1:15 to go in regulation. Overtime solved nothing, so it was off to the shootout where each side had a goal through the first three shooters before Tampa Bay found the game winning goal in round 4. Jonathan Quick took the OT loss, falling to 11-17-3 on the year after allowing 3 goals on 38 shots faced in regulation and OT.

The Florida Panthers will look to build on back-to-back wins after an 8-4 win over Toronto last time out. Josh Barkov and Aleksander Barkov staked the Panthers an early 2-0 lead within the first four minutes of the game before Mike Hoffman pushed the lead to 3-0 by the end of the first. Mike Matheson and Frank Vatrano pushed the lead to 5-0 with goals 1:36 apart before Toronto got on the board 1:05 later. Vincent Trocheck responded for Florida 2:16 later before Jonathan Huberdeau added a 7th goal. Toronto responded just :23 later and added a 3rd goal 2:26 after that and made things interesting at 7-4 within the first minute of the 3rd. Hoffman added his 2nd goal of the game just 3:59 later and rode that lead to the finish line as Florida held on for the win. Chris Driedger got the win to improve to 5-2-0 on the year after stopping 43 of 47 shots faced in the winning effort.

The plus money is tempting as the Kings have had so much success against the Panthers over the years, but these two teams meet just twice a year and the Kings have gone downhill a lot in the last couple of years. The Kings are also struggling lately, and have had issues on the road while Florida continues to light the lamp left and right so I’ll side with Florida and to cut down the price I’ll side with Florida on the puck line here.