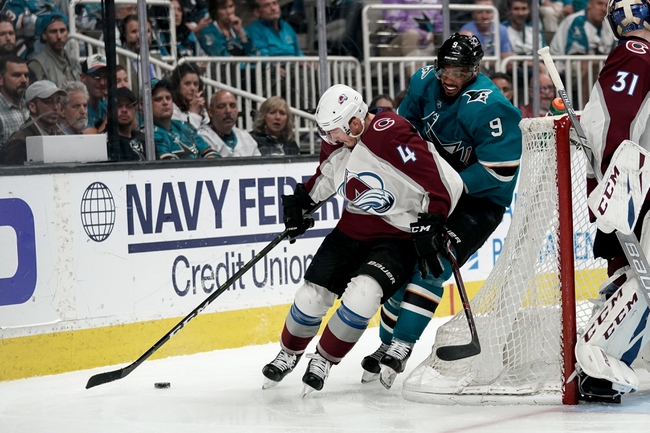 The San Jose Sharks and the Colorado Avalanche meet in NHL action from the Pepsi Center on Thursday night.

The San Jose Sharks will look to rebound after a 6-3 loss to Arizona in their last outing. Arizona opened the scoring with the lone goal of the opening period before doubling their lead five minutes into the 2nd period. Kevin Labanc and Timo Meier scored 3:13 apart to tie the game at two but the Coyotes would restore the lead by the end of the 2nd. Arizona pulled ahead by two again before Evander Kane made things interesting with just over two minutes to go, but 4-3 was as close as the Sharks got as the Coyotes added a pair of empty-net goals 1:18 apart to lock up the win. Aaron Dell took the loss for San Jose after allowing 4 goals on 38 shots faced in the losing effort.

The Colorado Avalanche will look to snap a four-game losing streak with a 3-2 overtime loss to Dallas last time out. Colorado stormed out to a 2-0 lead by the end of the first period thanks to goals from Nikita Zadorov and Gabriel Landeskog, But Dallas would pull a goal back just before the midway point of the 2nd period and would tie the game with just over five minutes to go in the game before completing their comeback with the game-winner just under two minutes into overtime. Philipp Grubauer took the OT loss, falling to 12-10-4 on the year after allowing all 3 goals on 30 shots faced in the losing effort.

I’ve harped a lot on San Jose lately as the Sharks just haven’t been playing very well for the better part of the last couple of months, but I’m not laying this kind of juice or chasing the puck line with a Colorado that hasn’t been playing well over the last couple of weeks and haven’t been playing well enough at home lately to consider it home ice advantage. I think the Sharks are more than capable of taking advantage of Colorado’s recent struggles, so I’ll take a shot on the plus money with San Jose here.