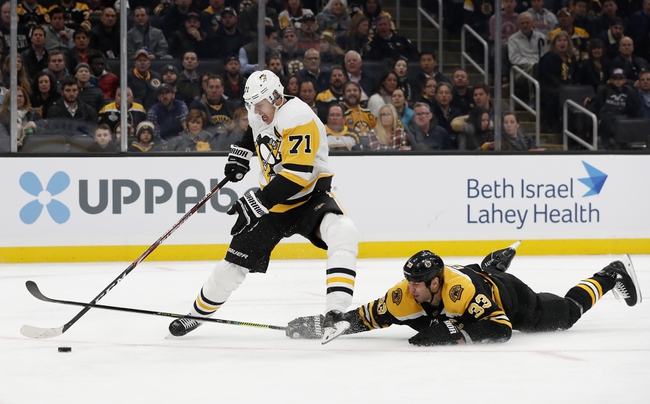 The Pittsburgh Penguins and the Boston Bruins meet in NHL action from the TD Garden on Thursday night.

The Pittsburgh Penguins will look to add to their current four-game winning streak after a 7-3 win over the Minnesota Wild in their last outing. Evgeni Malkin and Jared McCann quickly staked the Penguins a 2-0 lead after 20 minutes of play and that lead would hold before Bryan Rust and Malkin would score 1:01 apart later in the 2nd period to go ahead 4-0. Minnesota got on the board just 2:12 later and Marcus Foligno made it 4-2 early in the 3rd but Sidney Crosby and Dominik Simon would restore the four-goal lead just :39 apart. Alex Galchenyuk would bury a 7th Pittsburgh goal for good measure with just over three minutes to go before Minnesota added a consolation goal late in the 3rd period. Tristan Jarry got the win to improve to 16-6-1 on the year after stopping 26 of 29 shots faced in the winning effort.

The Boston Bruins will try to rebound from back-to-back losses after a 3-0 loss to Columbus last time out. Columbus would open the scoring in the latter stages of the opening period and the 1-0 lead would hold through the 1st, all of the 2nd and the early part of the 3rd before Columbus doubled the lead just under six minutes into the 3rd period. The Blue Jackets added a 3rd which proved to be more than enough as Boston wouldn’t be able to break the seal on Columbus’ goal. Jaroslav Halak ended up with the loss, falling to 10-5-6 on the year after allowing all 3 goals on 27 shots faced in the losing effort after relieving Tuukka Rask who left the game due to injury in the opening minutes of the game.

I definitely think that all hope is not lost for the Bruins as Jaroslav Halak has proven to be a capable backup for Boston and he’s had success winning as a starter in the past. However, I’m not sure how anyone can turn down plus money with Pittsburgh given how the Penguins have been playing lately, and it’s clear the lift that getting Sidney Crosby back has given to this team as we saw the dividends it paid against Minnesota. I’m all over Pittsburgh and the plus money here.