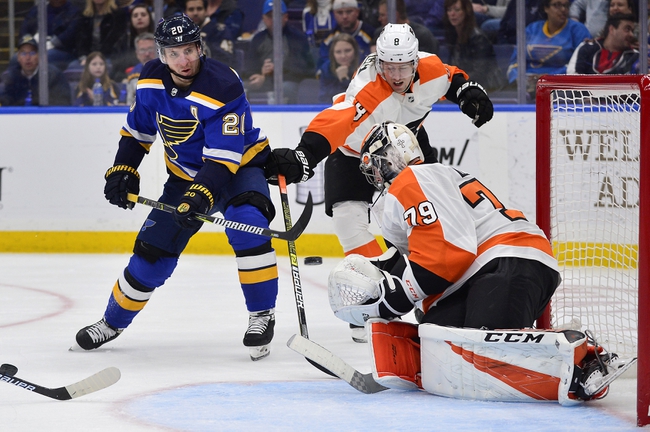 The Philadelphia Flyers and the St. Louis Blues meet in NHL action from the Enterprise Center on Wednesday night.

The Philadelphia Flyers will look to build on a 6-5 shootout win over Boston in their last outing. Boston opened the scoring just 4:15 into the game before doubling the game later in the 1st before Kevin Hayes got the Flyers on the board just 1:33 later. Boston restored the two goal lead early in the 2nd before Travis Sanheim pulled a goal back just :39 later. Boston forged ahead 5-2 before Sean Couturier and Connor Bunnamen scored 1:34 apart to make it a 5-4 game heading to the 3rd period. Sanheim tied the game at five with just over seven minutes to play, and the rest of the 3rd wouldn’t produce a winner. Neither did OT, so it was off to the shootout where neither side had a goal through the first four rounds before Travis Konecny gave Philly the lone goal of the shootout in the 5th round. Carter Hart got the win to improve to 15-11-3 on the year after stopping 26 of 31 shots faced in regulation and OT as well as all five shots faced in the shootout.

The St. Louis Blues will look to add to their current four-game winning streak after a 4-1 win over Anaheim in their last outing. Alex Steen opened the scoring just under eight minutes into the game before Anaheim tied the game at one by the end of the 1st. Tyler Bozak and Jaden Schwartz pushed the Blues ahead 3-1 before Ivan Barbashev added a 4th for St. Louis to make it a 4-1 game, a lead that the Blues would ride all the way to the finish line. Jake Allen got the win to improve to 8-3-3 on the year after stopping 20 of 21 shots faced in the winning effort.

The plus money with the Flyers is tempting, but the fact remains that the Flyers aren’t as good on the road as they are at home and Philly, despite a solid win against Boston, has still had struggles regardless of where they’re playing. St. Louis has been pretty much money at home this season and the Blues come into this game winning nine straight on home ice. I’ll side with St. Louis on the puck line to get some value out of the bet as I think the Blues make it ten straight here.