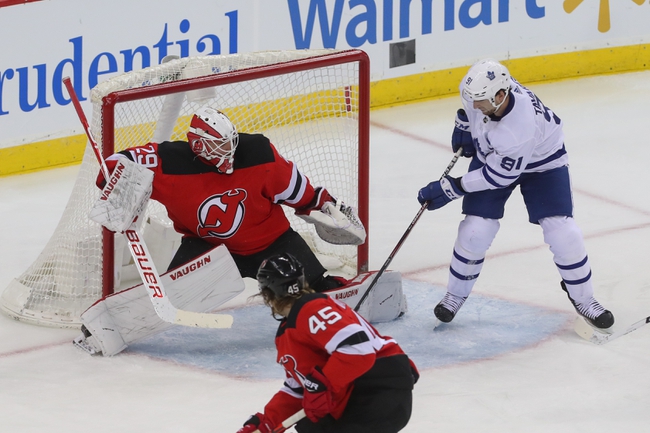 The New Jersey Devils and the Toronto Maple Leafs meet in NHL action from Scotiabank Arena on Tuesday night.

The New Jersey Devils will look to build on back-to-back wins after a 3-1 win over Tampa Bay in their last outing. The game was scoreless through the opening 20 minutes before Tampa Bay took the lead in the opening minute of the 2nd period. Andy Greene tied the game at one just 2:33 later and Travis Zajac gave the Devils the lead just before the midway point of the period. The game would see some back and forth action, but the Lightning wouldn’t find a game-tying goal as New Jersey iced the win with an empty-net goal at the last second in the 3rd period. Louis Domingue got the win to improve to 3-4-0 on the year after stopping 26 of 27 shots faced in the winning effort.

The Toronto Maple Leafs will be out to snap a three-game losing streak after an 8-4 loss to Florida last time out. Florida jumped out to a 2-0 lead within the first four minutes of the game and went ahead 3-0 by the end of the 1st period. The Panthers pushed ahead 5-0 within the first 2:25 of the 2nd period before Zach Hyman got the Leafs on the board just 1:05 later. Florida responded just 2:16 later and went up 7-1 later in the period before Mitch Marner pulled one back just :23 later. John Tavares made it 7-3 just 2:26 later and Marner scored his 2nd of the game in the 1st minute of the 3rd period to make things interesting at 7-4, but Florida would make it eight just under four minutes later. That was as close as Toronto would get as Florida slammed the door shut the rest of the way. Michael Hutchinson took the loss, falling to 3-7-1 on the year after allowing 4 goals on 17 shots faced in relief of Frederik Andersen who gave up 4 goals on 12 shots earlier in the game.

I’m really tempted by New Jersey and the plus money after taking down a couple of giants in Washington and Tampa Bay in their last couple of games. However, New Jersey hasn’t had much recent success against Toronto, and the Leafs have to be eager to bounce back and get back to winning ways after being pummelled in their last few games. The coach has even admitted that the Florida game may have been a slap in the face and a wake-up call, and I think that it was that as well as Toronto comes out firing here. I’ll side with Toronto on the puck line in this one.