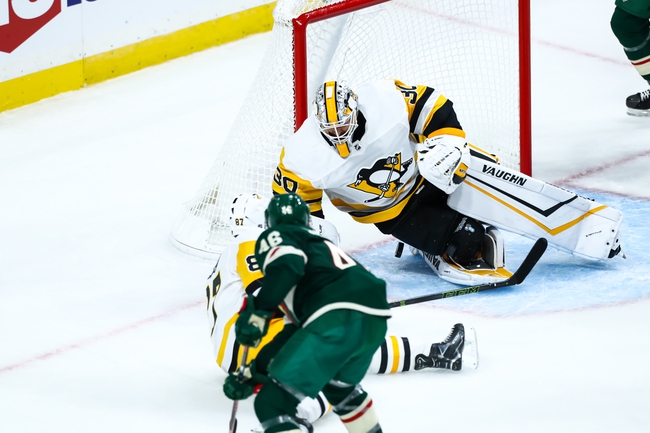 The Minnesota Wild and the Pittsburgh Penguins meet in NHL action from the PPG Paints Arena on Tuesday night.

The Minnesota Wild will look to snap a three-game losing streak after a 4-1 loss to Minnesota in their last outing. The game was scoreless through the opening 20 minutes before Vancouver took the lead just before the midway point of the 2nd period. Marcus Foligno tied the game at one with just over eight minutes to go in the 2nd but the Canucks would respond just :11 later. The Canucks would push the lead to 3-1 just 1:12 after that to carry the 3-1 lead into the 3rd period. Minnesota would outshoot the Wild 12-7 in the 3rd, but Minnesota wouldn’t be able to tie the game as Vancouver added an empty-netter in the dying seconds to ice the win. Devan Dubnyk took the loss, falling to 8-11-2 on the year after allowing 3 goals on 29 shots faced in the losing effort.

The Pittsburgh Penguins will look to add to their current three-game winning streak after a 4-3 shootout win over Arizona in their last outing. Jared McCann opened the scoring for the Pens less than three minutes into te game before Arizona tied the game later in the period. Patric Hornqvist gave Pittsburgh a lead just under four minutes into the 2nd period before Arizona tied the game six minutes later. The Coyotes would take the lead just after the midway point of the 3rd period but Brandon Tanev would tie the game again for Pittsburgh with just over three minutes to go. The game went to overtime and the extra frame solved nothing, so it was off to the shootout. Both teams scored in the 3rd round and we went scoreless until the 8th round of the shootout before Teddy Blueger scored the shootout winner to give the Pens the extra point and the win.

Trends will be updated when they’ve been released.

Minnesota and decent-sized plus money is tempting, but the problem is that the Wild are back to struggling and now have to go on the road where they haven’t played well this season against a Penguins team that keeps finding ways to win. Not to mention there’s a chance the Penguins could get Sidney Crosby back for this game. I just think everything points to a comfortable Penguins win here so I’ll side with Pittsburgh on the puck line here.