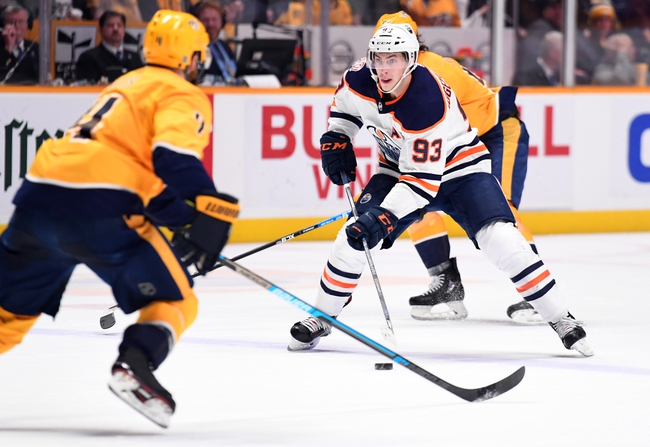 The Nashville Predators and the Edmonton Oilers meet in NHL action from Rogers Place on Tuesday night.

The Nashville Predators will look to build on back-to-back wins after a 1-0 win over Winnipeg last time out. Kyle Turris opened the scoring for the Predators with just over eight minutes to go in the opening period and despite being outshot in the 2nd and 3rd periods, the Predators would protect Nashville’s one goal lead the rest of the way. Juuse Saros got the win to improve to 6-7-4 on the year after stopping all 28 shots faced in the winning effort for his 1st shutout of the season.

The Edmonton Oilers will look to bounce back after a 4-3 loss to Calgary last time out. Calgary opened the scoring for the Oilers before Ryan Nugent-Hopkins tied the game at one just 1:03 later. Connor McDavid gave Edmonton the 2-1 lead just under four minutes after that before Caglary tied the game in the last minute of the opening period. Nugent-Hopkins gave Edmonton a 3-2 lead early in the 2nd period, but Calgary would tie the game at three just after the midway point of the 2nd period. The 3-3 tie would hold into the 3rd but Calgary re-took the lead in the first minute of the final period and despite the Oilers outshooting Calgary 15-10 in the 3rdperiod, the Flames held on for the win. Mikko Koskinen took the loss, falling to 14-9-2 on the year after allowing all 4 goals on 33 shots faced in the losing effort.

I haven’t been the biggest fan of the Predators during their recent stretch, but the problem is that the Oilers aren’t playing well at home and the Predators have had a lot of success against Edmonton, especially in Edmonton where the Preds have won the last 7 meetings head-to-head. Nashville is starting to turn things around with Hynes behind the bench, so I’ll lay the juice with Nashville on the road.