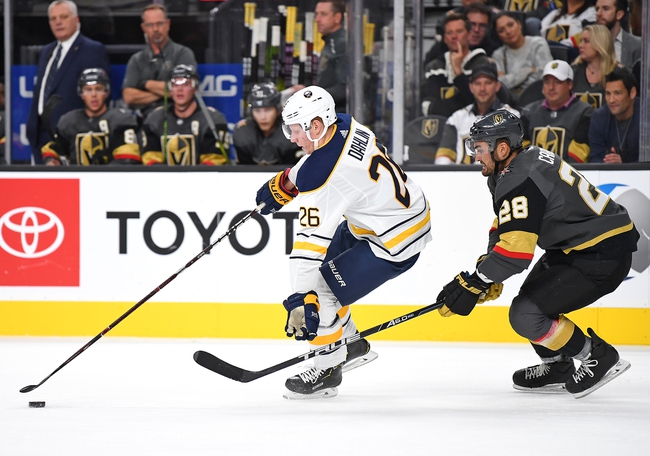 The Vegas Golden Knights and the Buffalo Sabres meet in NHL action from the KeyBank Arena on Tuesday night.

The Vegas Golden Knights will look to snap a three-game losing streak after a 3-0 loss to Columbus in their last outing. The Blue Jackets opened the scoring late in the opening period before doubling the lead just over two minutes into the 2nd period. The 2-0 score would hold going into the 3rd where Columbus added a 3rd goal to secure the win and seal Vegas’ fate. Max Pacioretty led Vegas with 5 shots on goal while Nick Holden had 4 shots on goal in the losing effort. Marc-Andre Fleury took the loss, falling to 18-10-3 after allowing all 3 goals on 22 shots faced in the losing effort.

The Buffalo Sabres will look to build on a 5-1 win over Detroit last time out. Evan Rodrigues scored a pair of goals 2:21 apart within the first five minutes of the game before Zemgus Girgensons made it 3-0 with just over seven minutes to go in the opening frame. Detroit pulled a goal back with the lone goal of the 2nd period before Zack Bogosian restored the three-goal lead and Rasmus Ristolainen scored 1:05 later to push the lead to 5-1, a lead that the Sabres would ride all the way to the finish line. Linus Ullmark got the win to improve to 14-12-3 on the year after stopping 21 of 22 shots faced in the winning effort.

I get Vegas being favored as the Golden Knights have been the more consistent team for the last month or so, but the Golden Knights are also sliding right now, and maybe a win, albeit against a bad Detroit team, is enough to get the Sabres going and getting them at home where they’ve played much better with plus money seems like it’s worth a shot here.