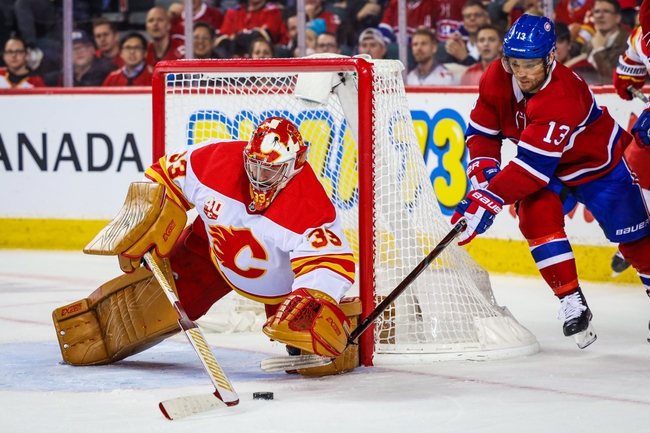 Where to Watch: TSN2 Stream live sports and exclusive originals on ESPN+. Sign up now!

The Calgary Flames and the Montreal Canadiens meet in NHL action from the Bell Centre on Monday night.

The Calgary Flames will look to build on their five-game winning streak after a 4-3 win over Edmonton last time out. Elias Lindholm opened the scoring for Calgary just over four minutes into the game but the Oilers tied the game at one just 1:03 later before taking a 2-1 lead just under four minutes after that. Johnny Gaudreau tied the game at two in the last minute of the opening period. Edmonton took the lead early in the 2nd before Dillon Dube tied the game at three just after the midway point of the middle period. Lindholm broke the tie for good with his 2nd goal of the game in the first minute of the 3rd period. Calgary was outshot 15-10 in the 3rd period but the Flames still held on for the win. Cam Talbot got the win to improve to 7-7-0 on the year after stopping 29 of 32 shots faced in the winning effort.

The Montreal Canadiens will look to build on a 2-1 OT win over Ottawa last time out. Nick Suzuki opened the scoring with the lone goal of the opening period and the Canadiens’ lead would hold through the 1st, all of the 2nd and most of the 3rd before Ottawa tied the game with six and a half minutes to go. The game headed for extra time where Ilya Kovalchuk paid dividends for his new team, scoring the OT winning in the final minute of the extra period. Carey Price got the win to improve to 17-16-4 on the year after stopping 41 of 42 shots faced in the winning effort.

Montreal picked up that elusive win and maybe it’s something that’ll spark the Canadiens going forward, but we’re getting a really good price on a Calgary team that hasn’t lost so far this decade (okay maybe a slight exaggeration, but it’s still true) and have been solid on the road lately. I just think this is great value on Calgary and I’ll side with the Flames for another win here.

Get Premium Picks Start Winning Now »
The pick in this article is the opinion of the writer, not a PickDawgz site consensus.
Previous Pick
NHL Power Rankings - All 31 Teams: 1/13/20
Next Pick
St. Louis Blues vs. Anaheim Ducks - 1/13/20 NHL Pick, Odds, and Prediction