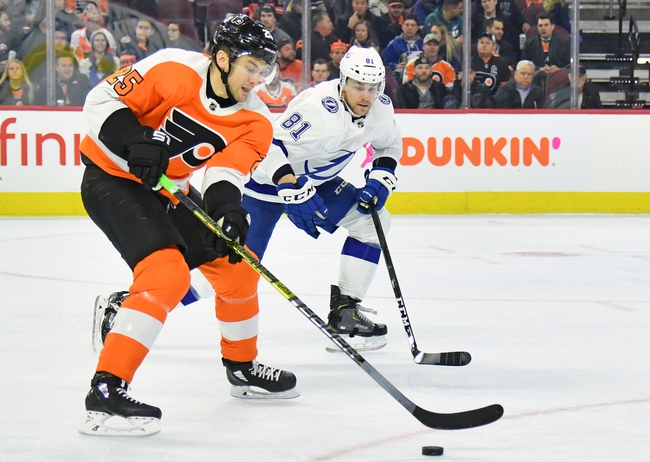 Where to watch: NBCS-Philadelphia+, SunSports Stream live sports and exclusive originals on ESPN+. Sign up now!

The Tampa Bay Lightning and the Philadelphia Flyers meet in NHL action from the Wells Fargo Center on Saturday night.

The Tampa Bay Lightning will look to add another notch to their nine-game winning streak after a 4-0 win over Arizona in their last outing. Alex Killorn and Mikhail Sergachev scored 3:!8 apart in the 1st to give the Bolts an early 2-0 lead before Nikita Kucherov scored a pair of goals 2:37 apart in the 2nd period to take a 4-0 lead that Tampa Bay would ride through the rest of the 2nd and the entire 3rd period on the way to the victory. Andrei Vasilevskiy got the win to improve to 21-9-2 on the year after stopping all 25 shots faced in the victory for his 1st shutout of the season.

The Philadelphia Flyers will look to build on a 3-2 win over Washington in their last outing. Travis Konecny opened the scoring for the Flyers just 3:24 into the game but the Caps would tie the game just 3:47 later and would take the lead with just over seven minutes to go in the opening frame. Robert Hagg tied the game in the last minute of the 1st period, and Kevin Hayes would give the Flyers the lead for good with a short-handed marker late in the 2nd period despite being outshot 11-3 in the middle period. Carter Hart would hold on through the 3rd period, picking up the win to improve to 14-10-3 on the year after stopping 26 of 28 shots faced in the winning effort.

I fully agree with Tampa Bay being favored here on a nine-game winning streak. However, while the Lightning have owned this series, the Bolts are still somewhat underperforming this year and they’re not a fantastic team on the road over the course of this season. Philadelphia has been lights out at home for the most part this season, and I think they’re worth a stab at plus money here.