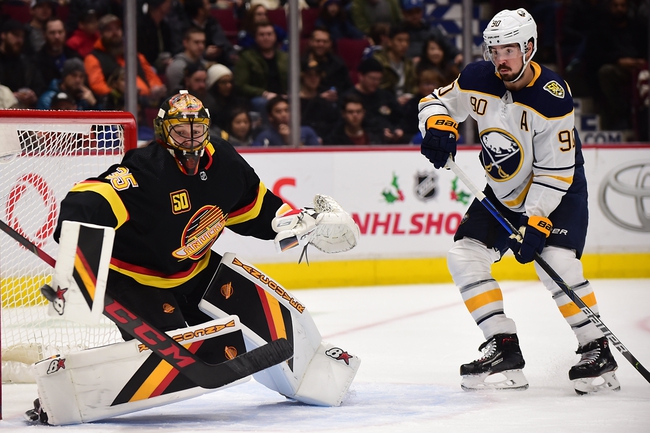 Where to watch: Sportsnet, MSG-Buffalo, Stream live sports and exclusive originals on ESPN+. Sign up now!

The Vancouver Canucks and the Buffalo Sabres meet in NHL action from the KeyBank Center on Saturday afternoon.

The Vancouver Canucks will look to rebound from back-to-back losses after a 5-2 loss to Florida last time out. Florida jumped out to a 2-0 lead just over three minutes into the game before Brock Boeser pulled a goal back less than four minutes later. The Panthers restored the two-goal lead with just over a minute to go in the opening frame. The Panthers pushed the lead to 4-1, and opened up a 5-1 lead in the 3rd before Tyler Motte pulled a goal back to make it 5-2 with just under eight minutes to play. The problem is that was as close as the Canucks would get as Florida rode the lead to victory. Thatcher Demko took the loss, falling to 8-5-1 on the year after allowing all 5 goals on 49 shots faced in the losing effort.

The Buffalo Sabres will look to bounce back after a 5-1 loss to the St. Louis Blues last time out. St. Louis took an early 2-0 lead before Jack Eichel got the Sabres on the board early on in the 2nd period. St. Louis would make it a two-goal game again just after the midway point of the 2nd period and the Blues would push ahead 5-1 late in the 3rd and ride that lead to the victory. Linus Ullmark took the loss, falling to 13-12-3 on the year after allowing 4 goals on 30 shots faced in the losing effort.

Vancouver and a low line is tempting when you consider how well Vancouver had been playing over the last couple of weeks, but this is essentially a 10am start for the Canucks, and Buffalo usually excels on home ice with these early games. Vancouver’s also lost 4 straight and 9 of their last 12 games on the road against teams from the East and given Buffalo’s home form this season, the Sabres are worth a look here.