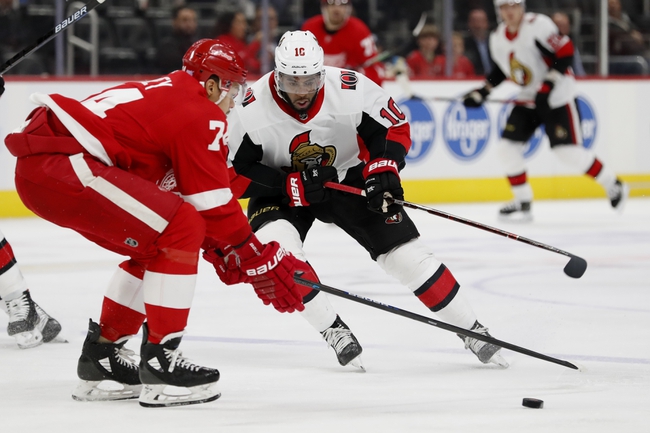 The Ottawa Senators and the Detroit Red Wings meet in an Atlantic division matchup in NHL action from Little Caesars Arena on Friday night.

The Ottawa Senators will be out to snap a five-game losing streak after a 6-1 loss to Washington in their last outing. Ottawa opened the scoring with a goal from Artem Anisimov just 5:40 into the game but that’s where the Sens’ luck would run out as Washington tied the game just 1:19 into the 2nd period. The Caps took a 3-1 lead by the end of the 2nd period. The Capitals would score another pair of goals in a span of 1:27 early in the 3rd before adding salt to the wound with a 6th goal late in the game. Craig Anderson took the loss, falling to 6-11-1 on the year after allowing 5 goals on 30 shots faced before being pulled early in the 3rd period.

The Detroit Red Wings will look to build on a 4-3 win over the Montreal Canadiens last time out. Montreal opened the scoring with the lone goal of the opening period and doubled their lead early on in the 2nd before Franz Nielsen pulled a goal back for Detroit later in the 2nd period. Robby Fabbri tied the game within the first minute of the 3rd period, but the Habs would restore their lead just over five minutes later. Nielsen tied the game at three with his 2nd goal of the game before Filip Zadina gave Detroit the lead for good with just under four minutes to play. Jonathan Bernier got the win to improve to 9-12-2 on the year after stopping 23 of 26 shots faced in the winning effort.

I’m almost tempted to side with Ottawa as the thought of Detroit in a favorite role makes me kind of ill. However, Ottawa continues to provide no value regardless of where they play while Detroit’s victories for the most part this season have come at home where they capitalize on struggling teams like they did against Montreal last time out. This isn’t a game I’m going near based on the line, but if forced to pick, I’d side with Detroit at home here.