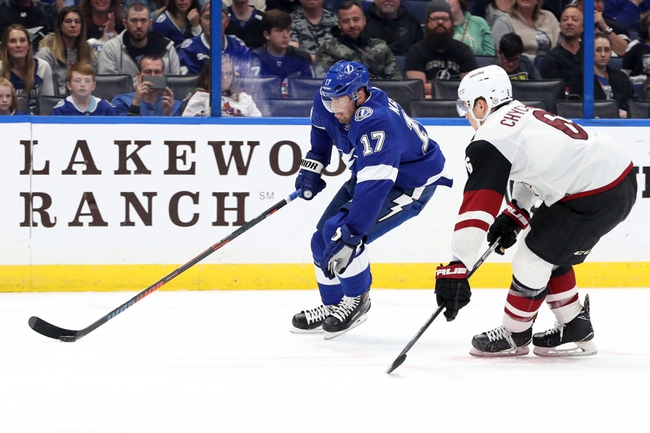 The Arizona Coyotes and the Tampa Bay Lightning meet in NHL action from Amalie Arena on Thursday night.

The Arizona Coyotes will look to build on their current four-game winning streak after a 5-2 win over Florida in their last outing. The games was scoreless through the opening 20 minutes before Christian Dvorak gave the Coyotes the lead just after the midway point of the 2nd period. Florida tied the game and took the lead in a span of :36 just over a minute later. Oliver Ekman-Larsson and Taylor Hall tied the game and gave Arizona the lead back just 2:06 apart. Carl Soderberg added a goal with just over two minutes to go and Lawson Crouse tacked on an empty-netter in the last minute of the game to give the ‘Yotes a convincing win. Adin Hill got the win to improve to 1-0-0 on the year after stopping 37 of 39 shots faced in the winning effort.

The Tampa Bay Lightning will look to build on their current eight-game winning streak after a 9-2 rout of the Vancouver Canucks in their last outing. Vancouver took the lead with the lone goal of the opening period before Tyler Johnson tied the game early in the 2nd period. Steven Stamkos gave the Bolts the lead just after the midway point of the 2nd period. Vancouver tied the game at two before Alex Killorn restored the lead just 1:02 later. Carter Verharghe, Nikita Kucherov and Erik Cernak all scored in a span of :56 to take a 6-2 lead after 40 minutes of play. Brayden Point made it 7-2 early in the 3rd before Verhaeghe netter two more goals to complete his hat trick and put a stamp on the win. Andrei Vasilevskiy got the win to improve to 20-9-2 on the year after stopping 21 of 23 shots faced in the losing effort.

The Coyotes are a team I’ve been riding a lot this season and it’s paid off, especially on the road, so it’s hard to pass on heavy plus money. However, the Lightning are absolutely rolling right now, and just stepped over a Vancouver team that was on their own seven-game winning streak, like they weren’t even in front of them. I just think that this is a bad spot for the Coyotes and think the Lightning win this one by a couple of goals.