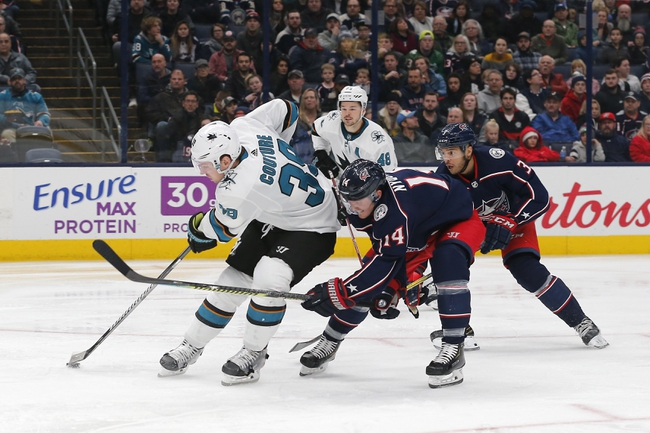 Where to Watch: FS-Ohio, NBCS-California Stream live sports and exclusive originals on ESPN+. Sign up now!

The Columbus Blue Jackets and the San Jose Sharks meet in NHL action from the SAP Center on Thursday night.

The Columbus Blue Jackets will look to build on back-to-back wins after a 4-3 win over Anaheim last time out. Anaheim opened the scoring just 3:06 into the game before Eric Robinson tied the game at one for Columbus with just over eight minutes to go. The Ducks retook the lead early in the 2nd, but Nathan Gerbe and Zach Werenski scored 1:12 apart to give Columbus a 3-2 lead heading into the 3rd period. Werenski added an empty-netter for Columbus with 1:33 to play, and Anaheim would make things interesting at 4-3 with less than a minute to go, but it was too little too late as Columbus held on for the win. Elvis Merzlikins got the win, improving to 4-5-4 on the year after stopping 37 of 40 shots faced in the winning effort.

The San Jose Sharks will look to rebound from back-to-back losses after a 3-2 loss to St. Louis last time out. The game was scoreless through the opening period before St. Louis took a 2-0 lead with a pair of goals 1:20 apart in the 2nd period. The lead would hold going into the 3rd where Timo Meier got San Jose on the board 2:14 into the final period but the Blues would respond 1:53 later. Erik Karlsson pulled a goal back short-handed with just over three minutes to go. It wasn’t enough though as St. Louis held on for the win and sent San Jose back empty-handed. Aaron Dell took the loss, falling to 6-7-2 on the year after allowing all 3 goals on 27 shots faced in the losing effort.

I get San Jose being favored because they’re at home, but even still, this line doesn’t make sense to me. Columbus is playing way better than San Jose right now and while the Blue Jackets have had issues in San Jose, these two teams usually play just twice a year, and a lot of those games came back when the Blue Jackets weren’t a very good hockey team and the Sharks were a perennial playoff team. I just think that the Sharks aren’t playing well enough to be favored, even at home, so I’ll take a shot with Columbus here.