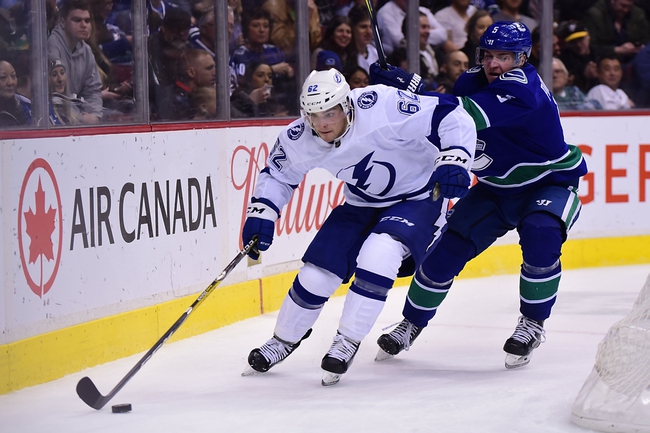 Where to watch: SunSports Stream live sports and exclusive originals on ESPN+. Sign up now!

The Vancouver Canucks will look to add to their current seven-game winning streak after a 2-1 win over the New York Rangers in their last game. Antoine Roussel gave the Canucks the lead just 1:46 into the game before New York tied the game up at one just before the eight minute mark of the opening period. The 1-1 tie would remain through the rest of the 1st, all of the 2nd and most of the final period before Tyler Myers gave Vancouver the lead for good with just 1:29 to go. Jacob Markstrom got the win to improve to 15-11-3 on the year after stopping 36 of 37 shots faced in the winning effort.

The Tampa Bay Lightning will look to extend their own seven-game winning streak after a 3-1 win over the Carolina Hurricanes in their last outing. Mitchell Stephens and Steven Stamkos gave the Lightning an early 2-0 lead with a pair of goals 2:08 apart before Brayden Point pushed the Bolts ahead 3-0 with the lone goal of the 2nd period. Carolina pulled a goal back with just over eight minutes to play, but ultimately it was too little too late as the Lightning rode the 3-1 cushion to the finish line. Andrei Vasilevskiy got the win to improve to 19-9-2 on the year after stopping 28 of 29 shots faced in the winning effort.

I get Tampa Bay being favored at home, but we are back to having these prices with the Lightning getting to be on the verge of ridiculous. I get the Bolts have been a solid home team over the years and the Lightning still have a really good team, but we have a chance to make almost two times our money with a Vancouver team that’s on their own seven-game winning streak. The road team’s also had the bulk of the success in this matchup, so I’ll take a stab at Vancouver and the plus money here.