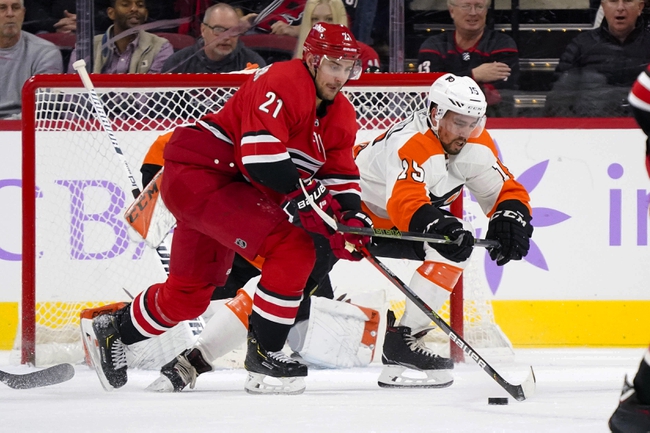 Where to watch: NBCS-Philadelphia, FS-Carolina Stream live sports and exclusive originals on ESPN+. Sign up now!

The Philadelphia Flyers and the Carolina Hurricanes meet in NHL action from the PNC Arena on Tuesday night.

The Philadelphia Flyers will be out to snap a three-game losing streak after a 6-2 loss to Arizona in their last outing. Arizona jumped out to a 2-0 lead with a pair of goals 1:07 apart just after the midway point of the opening period before going ahead 3-0 by the end of the opening period. The Coyotes went up 4-0 in the literal last second of the 2nd period before Tyler Pitlick got the Flyers on the board three minutes into the 3rd period. Arizona responded just 1:27 later but Justin Braun would make things interesting before the midway point of the 3rd period, but ultimately it was too little too late as Philly added an empty-netter late in the 3rd period to take the 6-2 lead they’d ride to the finish. Carter Hart took the loss, falling to 13-10-3 on the year after allowing 3 goals on 12 shots before being pulled in the 1st period.

The Carolina Hurricanes will look to rebound from back-to-back losses after a 3-1 loss to Tampa Bay in their last outing. Tampa Bay jumped ahead 2-0 early in the 1st with a pair of goals 2:08 apart before the Bolts made it 3-0 with the lone goal of the 2nd period. Andrei Svechnikov pulled one back for Carolina with just over eight minutes to go, but despite outshooting the Lightning 11-4 in the 3rd period, the Hurricanes wouldn’t come any closer as Tampa Bay shut the door on any comeback attempt the rest of the way. Petr Mrazek took the loss, falling to 16-10-2 after allowing 3 goals on 26 shots faced in the losing effort.

Getting back to the East Coast might make things a bit easier for the Flyers, but the fact remains that Philly is just waiting for this road trip to end, as this much travel can take its toll on you mentally, professional or not. The Flyers are also a much better team at home than on the road, and the Flyers have allowed 16 goals in their last three games. Carolina’s had their own bumps as well, but the Hurricanes are pretty good at home and I think the ‘Canes can take advantage of the Flyers’ recent issues and win this one in regulation.