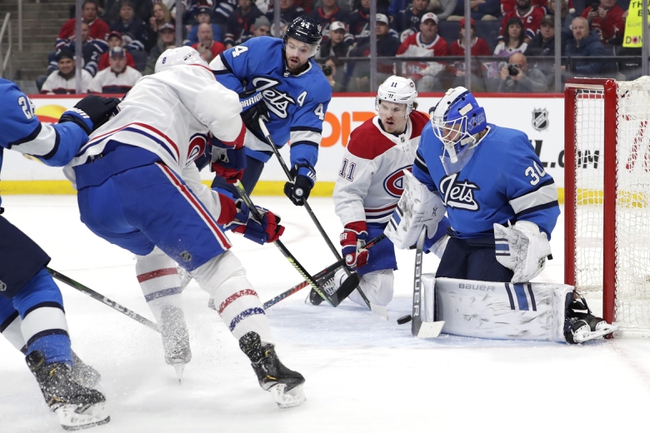 The Winnipeg Jets and the Montreal Canadiens meet in NHL action from the Bell Centre on Monday night.

The Winnipeg Jets will look to rebound from back-to-back losses after a 3-2 overtime loss to Minnesota in their last outing. Minnesota opened the scoring just 1:12 into the game and would hold onto that lead before Mark Scheifele scored :39 into the 2nd period on the power play and the game would remain tied at one after 40 minutes of play. Blake Wheeler gave the Jets the lead :52 into the 3rd period, but the Wild would tie the game with five and a half minutes to play, and that would push the game to overtime as no one found the back of the net in the remainder of regulation time. Minnesota found the OT winner 1:52 into overtime to get the win and send Winnipeg back with just a point to show for their efforts. Connor Hellebuyck took the OT loss, falling to 18-12-4 after allowing all 3 goals on 44 shots faced in the losing effort.

The Montreal Canadiens will be out to snap a five-game losing streak after a 3-2 overtime loss to Pittsburgh last time out. Artturi Lehkonen opened the scoring for Montreal 8:42 into the game but Pittsburgh tied the game at one just :46 later. Lehkonen would give Montreal another lead with his 2nd goal of the game and the lead would hold up through the rest of the 2nd and the early part of the 3rd before the Penguins tied the game again 5:24 into the 3rd period. The rest of the 3rd period wouldn’t give us a winner, so it was off to overtime where Pittsburgh found the overtime winner 1:49 into the extra frame. Carey Price took the OT loss, falling to 16-14-4 after allowing all 3 goals on 37 shots faced in the losing effort.

The Jets haven’t had much luck in Montreal, but there’s no way I’m laying this kind of juice with a Montreal team that’s lost 5 straight and has won just 8 of their 20 home games this season. Winnipeg’s been one of the better road teams in the league this season and the road team’s had the bulk of the success in this matchup. I’ll take a shot with Winnipeg and the plus money here.