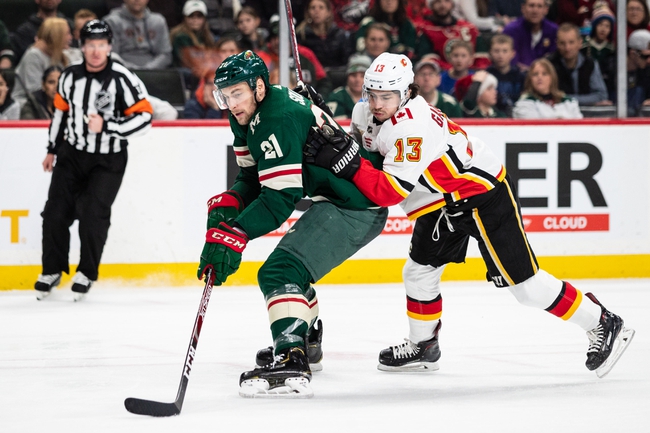 The Calgary Flames and the Minnesota Wild meet in NHL action from the Xcel Energy Center on Sunday night.

The Calgary Flames will look to build on a 4-3 win over the New York Rangers in their last outing. Johnny Gaudreau and Mikael Backlund staked Calgary an early 2-0 lead with a pair of goals 3:01 apart before New York scored twice in :25 to tie the game at two all just 8:07 into the game. Derek Ryan gave Calgary the lead back, but New York would tie the game again early on in the 2nd period. Sean Monahan scored to give Calgary a 4-3 lead just 2:36 later, a 4-3 lead that the Flames would ride to the finish line despite New York’s best efforts to tie the game down the stretch. Cam Talbot got the win to improve to 4-7-0 on the year after stopping 24 of 27 shots faced in the winning effort.

The Minnesota Wild will also look to pick up some momentum after a 3-2 win over the Winnipeg Jets in their last outing. Marcus Foligno opened the scoring for the Wild just 1:12 into the game with the lone goal of the opening period but Winnipeg would tie the game at one with the lone goal of the 2nd period. The Jets took the lead within the first minute of the 3rd period, but Luke Kunin would tie the game at two for Minnesota with five and a half minutes to go. The rest of the 3rd wouldn’t give us a decisive winner, so it was off to overtime where Eric Staal found the winner to give the Wild the win and the extra point. Devan Dubnyk got the win to improve to 8-10-2 on the year after stopping 19 of 21 shots faced in the winning effort.

I considered laying the juice with Minnesota as the Wild have been a strong home team and a back-to-back is always easier when you don’t have to travel. However, Minnesota hasn’t been very good on the second half of a back-to-back and the underdog has had a lot of success in this matchup. You also have to imagine that Calgary is due for a win as their playing better than their record would indicate. I’ll take a shot with the Flames here.