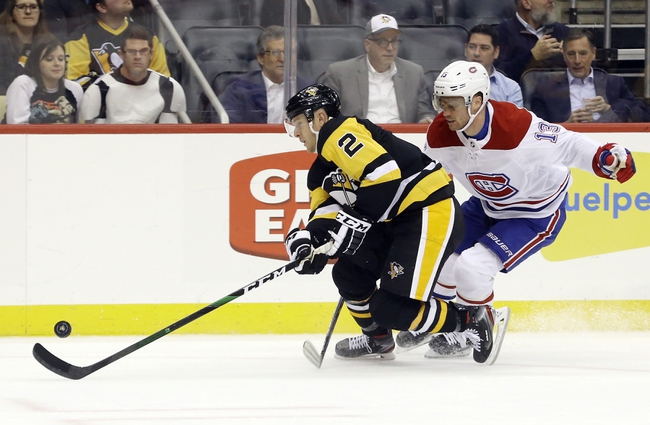 The Pittsburgh Penguins and the Montreal Canadiens meet in NHL action from the Bell Centre on Saturday night.

The Pittsburgh Penguins will look to rebound after a 3-2 overtime loss to San Jose in their last outing. San Jose took the lead just 2:48 into the game before Patric Hornqvist tied the game for the Pens later in the period. The tie lasted all of one minute before San Jose re-took the lead. Hornqvist tied the game with his 2ndgoal of the contest, the lone goal of the 2nd period at that as well. The rest of the 3rd couldn’t produce a winner, so it was off to overtime where Brent Burns found the winner just over two minutes into the extra period. Tristan Jarry took the OT loss, falling to 13-5-1 on the year after allowing 3 goals on 32 shots faced in the losing effort.

The Montreal Canadiens will be out to snap a four-game losing streak after a 2-1 loss to Tampa Bay in their last outing. Tampa Bay took the lead just :42 into the game before Montreal tied the game at one just over five minutes later. Tampa Bay would re-take the lead just 2:40 after that, and despite Montreal outshooting the Bolts 39-23 in the game, the Habs would be unable to find a game-tying goal over the last 51:32. Carey Price ended up with the loss, falling to 16-14-3 after allowing both goals on 23 shots faced in the losing effort.

I got burned with Pittsburgh against the Sharks, but I’m not laying juice with a Montreal team that’s lost 4 in a row. Sure, Pittsburgh’s lost Jake Guentzel for a bit and the Penguins have a lot of injuries right now, but Pittsburgh just has this tendency to win hockey games regardless of who is playing and who is injured. I’ll take Pittsburgh in this one.