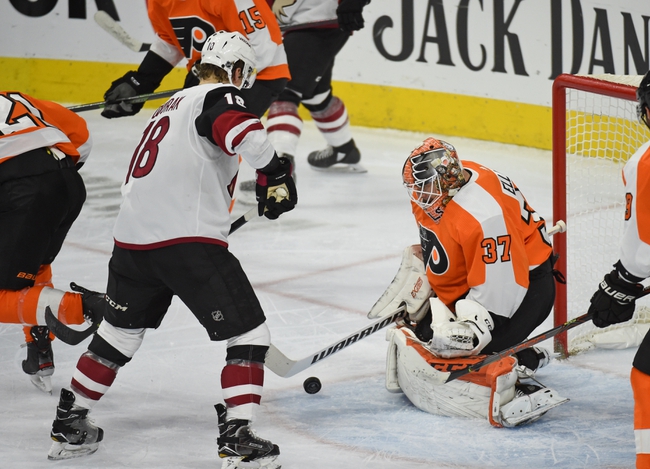 Where to Watch: FS-Arizona, NBCS-Philadelphia Stream live sports and exclusive originals on ESPN+. Sign up now!

The Philadelphia Flyers and the Arizona Coyotes meet in NHL action from the Gila River Arena on Saturday night.

The Philadelphia Flyers will look to rebound from back-to-back losses after a 5-4 loss to the Vegas Golden Knights in their last outing. Claude Giroux opened the scoring for the Flyers 7:33 into the game before Vegas tied the game 1:09 later. The Golden Knights pushed ahead 3-1 with a pair of goals 1:19 apart later in the 1stbefore Travis Konecny pulled a goal back for Philly later in the period. Vegas would restore the two-goal lead with less than three minutes to go in the opening frame and go ahead 5-2 just before the midway point of the 2nd period. Sean Couturier pulled one back for Philadelphia just 2:31 later and added his 2nd goal of the game just :15 into the 3rd period. However, despite outshooting Vegas 13-10 in the 3rd, the Golden Knights held on for the win. Carter Hart took the loss, falling to 13-9-3 on the year after allowing all 5 goals on 33 shots faced in the losing effort.

The Arizona Coyotes will look to build on back-to-back wins after a 4-2 win over Anaheim last time out. Lawson Crouse opened the scoring for the Coyotes before Anaheim tied the game five minutes later. The Ducks took a 2-1 lead after 40 minutes of play with the lone goal of the 2nd period, but Christian Dvorak tied the game at two just :26 into the 3rd period. Brad Richardson and Carl Soderberg scored 1:02 apart to push the Coyotes ahead 4-2, a 4-2 lead that they’d ride to the final buzzer. Antti Raanta got the win to improve to 8-8-2 on the year after stopping 26 of 28 shots faced in the winning effort.

I considered Philly with the plus money, but the fact is that the Flyers are a different team away from home, and not in a good way. Arizona has been up and down this season and are barely below .500 at home, but the Coyotes are also a solid defensive team and are starting to get their act together again after stumbling for a bit over the last few weeks. I’ll lay the juice with Arizona at home here.