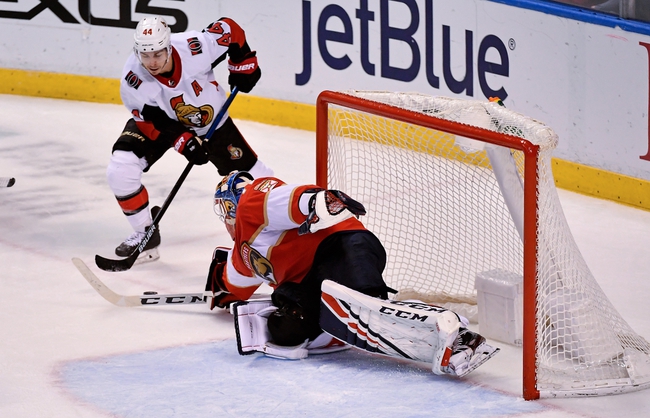 The Florida Panthers and the Ottawa Senators meet in an Atlantic division matchup in NHL action from the Canadian Tire Centre on Thursday night.

The Florida Panthers will look to rebound after a 4-1 loss to the Columbus Blue Jackets in their last outing. Columbus opened the scoring with the lone goal of the opening period before Colton Sceviour tied the game at one less than four minutes into the 2nd period. The Blue Jackets re-took the lead in the later stages of the 2ndperiod and forged ahead 4-1 with a pair of goals 3:51 apart to take a 4-1 lead that Florida would be unable to chip into the rest of the way. Sergei Bobrovsky took the loss, falling to 14-11-4 after allowing 4 goals on 28 shots faced in the losing effort.

The Ottawa Senators will look to rebound after a 5-2 loss to the Pittsburgh Penguins in their last outing. Pittsburgh jumped ahead just :27 into the game and doubled the lead just after the midway point of the opening period before Nic Paul finally got the Senators on the board just over four minutes into the 2nd period. Pittsburgh responded just 1:41 later and Paul would get a goal back again for the Sens with his 2nd of the game with just over four minutes to go in the middle period. Pittsburgh would respond again just :53 later, and would take an insurmountable 5-2 lead just under seven minutes into the 3rd. Marcus Hogberg took the loss, falling to 1-2-2 on the year after allowing 5 goals on 33 shots faced in the losing effort.

This line is showing zero respect to Ottawa and how the Senators have performed at home this season. Sure, Florida’s won 4 of the last 5 against Ottawa and the Panthers have a lot of talent offensively, but the Panthers have also lost 4 of their last 5 road games and just lost to a Columbus team that was scrambling after losing their top goaltender to injury. Ottawa has been lights out at home over the last couple of months, and I just think the plus money is too good to pass on here so I’ll side with Ottawa in this one.