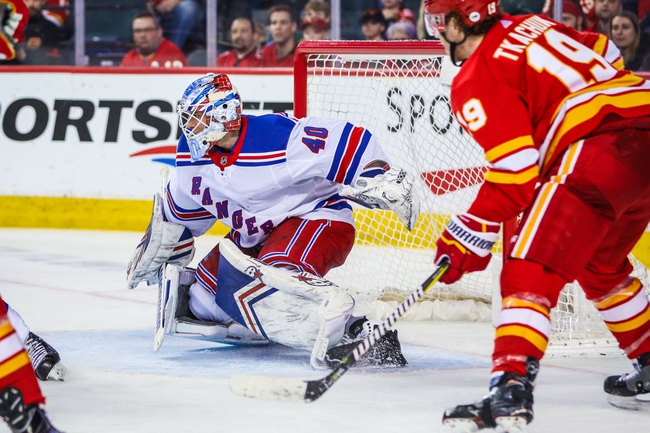 Where to watch: SN-Flames, MSG Stream live sports and exclusive originals on ESPN+. Sign up now!

The New York Rangers and the Calgary Flames meet in NHL action from the Scotiabank Saddledome on Thursday night.

The New York Rangers will look to bounce back after a 7-5 loss to the Edmonton Oilers in their last outing. Edmonton scored just :11 into the game before pushing ahead 3-0 with a pair of goals 2:27 apart around the midway point of the opening period. The Oilers went up 5-0 with a pair of power play goals :12 apart and 6-0 with just under five minutes to go in the 2nd period, giving Alexandar Georgiev the hook. Chris Kreider pulled a goal back for New York in the last minute of the 2nd period and Ryan Strome made it 6-2 with an early 3rdperiod tally for New York. Marc Staal and Artemi Panarin scored :38 apart to make it a 6-4 game and Mika Zibanejad made it 6-5 with just under four minutes to go. The comeback attempt fell short though as Edmonton sealed the win with an empty-netter late in the 3rd. Georgiev took the loss, falling to 10-8-1 after allowing 6 goals on 24 shots faced in the losing effort.

The Calgary Flames will look to bounce back after a 5-3 loss to Chicago in their last outing. Chicago jumped out in front 2-0 with a pair of goals 1:21 apart before making it 3-0 by the end of the 1st period and went ahead 4-0 just before the midway point of the 2nd period. Sam Bennett got Calgary on the board with just :06 to go in the 2nd frame and Michael Frolik and Sean Monahan scored 1:18 apart to make things interesting at 4-3. The comeback was all for naught though, as Chicago scored an empty-net goal with just a second to play, ensuring that the Flames would go home empty-handed. David Rittich took the loss, falling to 17-10-5 after allowing 4 goals on 32 shots faced in defeat.

I get Calgary being favored because they’re at home, but the problem I have with that is that the Flames haven’t been playing well enough to warrant this kind of price tag, especially on home ice where they’ve lost 5 straight games. New York almost came back from six goals down to beat Edmonton, and side by side, while each have won just four times in their last ten games, you could make a case that the Rangers are playing the better hockey of the two and they’ve won 10 of the last 14 against Calgary. I’ll take a shot with New York and the plus money here.