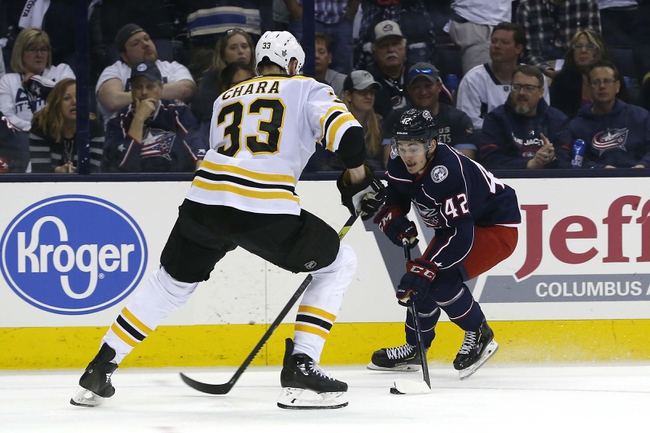 The Columbus Blue Jackets and the Boston Bruins meet in NHL action from the TD Garden on Thursday night.

The Columbus Blue Jackets will look to build on a 4-1 win over the Florida Panthers in their last outing. Zach Werenski opened the scoring for the Blue Jackets with the lone goal of the opening period before Florida tied the game at one early in the 2nd period. Boone Jenner restored the lead for Columbus later in the middle frame. Werenski completed his hat trick with a pair of goals 3:51 apart in the 3rd period, sealing the win for Columbus. Elvis Merzlikins got his 1st win of the year after stopping 36 of 37 shots faced in the winning effort.

The Boston Bruins will look to rebound from a 3-2 shootout loss to the New Jersey Devils in their last outing. Brad Marchand opened the scoring on the power play just 2:03 into the game and the Bruins would hold onto that lead going into the 2nd where Joakim Nordstrom doubled the lead early in the 2nd period before Blake Coleman pulled a goal back for New Jersey just 4:31 later. The Devils would tie the game in the later stages of the 3rd period, eventually sending the game to overtime. The extra frame solved nothing, so it was off to the shootout where none of the first four rounds of shots saw any scoring, but both sides would score in the 5thround with Chris Wagner scoring for Boston. Round 6 would see only New Jersey score, leaving the Devils with the win and sending Boston home with just a single point. Jarovlav Halak took the OT loss, falling to 9-3-5 on the year after allowing two goals on 44 shots faced in regulation and OT as well as two goals on 6 shots in the shootout.

I get that Boston’s been strong at home, losing just once in regulation and we are already at the new year. However, the Bruins haven’t been winning games with any consistency as of late, and we’re getting these steep prices and I for one am not going to keep laying them with the hopes that maybe I’ll just catch it when the Bruins do decide to turn it on. Columbus is riding a 10-game point streak, so the Blue Jackets have been highly competitive, and maybe Merzlikins getting his first win will start him on the uptrend. I’ll take a shot with Columbus and the plus money in this one.