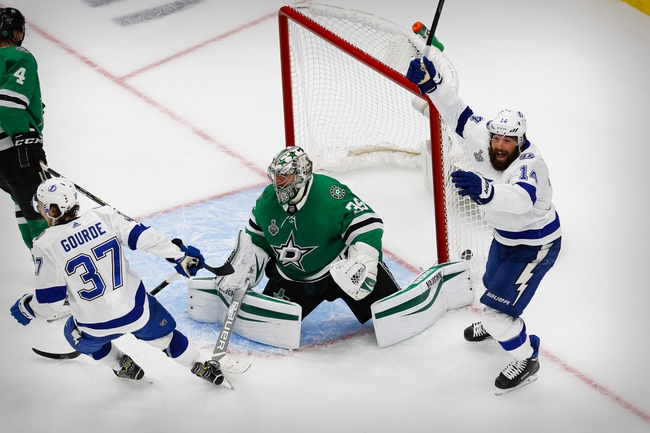 The Dallas Stars and the Tampa Bay Lightning meet in game five of their best-of-seven Stanley Cup final game in NHL action from Rogers Place on Saturday night.

The Dallas Stars will try to fight for one more day and force a game six despite a 5-4 overtime loss to the Lightning to make it a 3-1 series lead for Tampa Bay.

John Klingberg opened the scoring for the Stars just after the seven-minute mark of the opening period and Joe Pavelski would double Dallas’ lead with just undet two minutes to go in the opening frame but Brayden Point would respond for Tampa Bay just :59 later. Point would tie the game at two with his second goal of the game just after the two-minute mark of the 2nd, but Corey Perry pushed the lead to 3-2 at the 8:26 mark of the second. Yanni Gourde would tie the game at three on the power play for the Bolts with just over a minute to play in the second and Alex Killorn would push Tampa Bay in front with their first lead of the game just under seven minutes into the third. Pavelski would score his 2nd of the game to tie things at four just past the midway point of the 3rd period. The rest of the final frame solved nothing, so it was off to overtime where Kevin Shattenkirk ended things faigs early for Tampa Bay, scoring just 6:34 into the extra period to push Tampa within one game of lifting Lord Stanley’s mug.

Andrei Vasilevskiy got the win in goal for Tampa Bay after stopping 26 of 30 shots faced in the win while Anton Khudobin took the loss for the Stars after allowing five goals in 35 shots faced in the losing effort in between the pipes.

I would love to see the Stars fight to push for a game six, but I just feel like Dallas’ time here is done. The Stars put up a fantastic fight and a great performance, but Tampa Bay is simply the better team here and is showing it on both ends of the ice. I’ll lay the juice with Tampa Bay here as I think the Bolts seal the deal and win the championship.