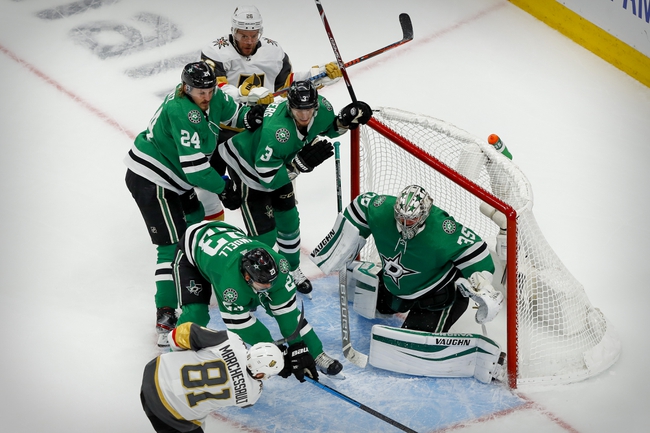 The Vegas Golden Knights and the Dallas Stars meet in game four of their best-of-seven Western Conference final series in NHL action from Rogers Place on Saturday night.

The Vegas Golden Knights will look to bounce back and even the series up after falling behind two games to one after a 3-2 overtime loss to Dallas last time out. The game was scoreless through the opening 20 minutes and for the majority of the second period before Jamie Oleksiak gave Dallas the lead with :17 to go in the second period. Shea Theodore would tie the game at one for Vegas just 3:49 into the 3rd but Jamie Benn would restore Dallas’ lead less than four minutes later. Mark Stone tied the game again for Vegas just over five minutes later, and the game would eventually force overtime with neither side breaking the deadlock before the end of the 3rd period. Alex Radulov wasted no time settling the result, giving Dallas the overtime winner just :31 into overtime and giving the Stars the 2-1 series lead.

Anton Khudobin got the win after stopping 38 of 40 shots faced between the pipes in the victory for Dallas while Robin Lehner took the loss for Vegas after giving up 3 goals on 23 shots faced in defeat.

I think this is going to be a back and forth series, but the problem is that Vegas just doesn’t look like they have an answer for Dallas offensively. Sure, Vegas won one of the games already in the series, but Dallas couldn’t find the net in that game and when they have been on, Dallas has been really tough to beat. I think as far as this game goes, right or wrong, you have to follow the value so I’ll side with the Stars and the plus money as my free pick for this game but my stronger play is on the total and I have that available as a premium pick that you can find here.