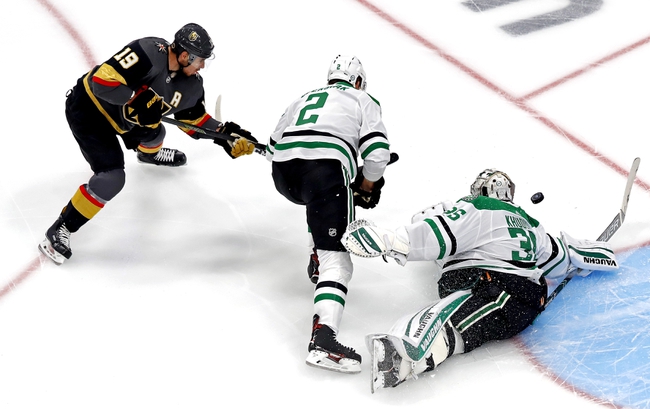 The Dallas Stars and the Vegas Golden Knights meet in game two of their best-of-seven Western Conference Finals series in NHL action from Rogers Place on Tuesday.

The Dallas Stars will look to jump out in front and power ahead to a 2-0 series lead after a somewhat surprising 1-0 win over Vegas in the series opener. Not surprising because of the Stars winning, but just how low scoring it was with Vegas having so much scoring depth across their lineup and the Stars just coming off of that high-octane offensive series against Colorado.

John Klingberg opened the scoring for the Stars just 2:36 into the game and Dallas would own the Golden Knights for the first two periods, outshooting Vegas 23-12. The Golden Knights would return the favor in the 3rd, outshooting Dallas 13-2, and 26-25 in the game, but in the end, Vegas would be denied the game-tying goal and the equalizer at that as Dallas clinged to the 1-0 win throughout the majority of the 60 minutes.

Anton Khudobin got the win after stopping all 25 shots in goal for Dallas to improve to 9-5-0 this postseason while Marc-Andre Fleury ended up with the loss after allowing the lone goal on 25 shots in the defeat for Vegas between the pipes.

I’m tempted by the Golden Knights because their scoring struggles can’t last forever and it’s only a matter of time before they break out a five goal period like Dallas pulled against Colorado. However, the Stars bullied their way around in game one and while Vegas bouncing back is possible, I still envision this game, and series for that matter, to be tight, physical, and lower scoring than what we’ve seen from both of these teams so far in the postseason. I’ll side with the under as my free play for this game but my stronger play is on the side and I have that available as a premium pick that you can find here.