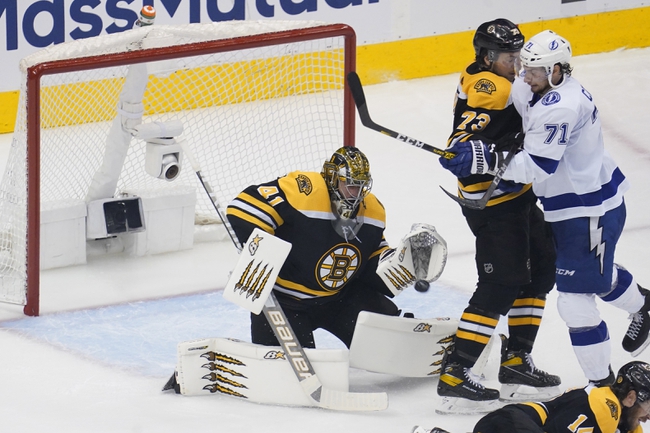 The Tampa Bay Lightning and the Boston Bruins meet in game five of their best-of-seven Eastern Conference semi-final series from Scotiabank Arena on Monday.

The Tampa Bay Lightning will look to close out the series after taking a commanding 3-1 series lead with a 3-1 victory over the Bruins in game four last time out.

Ondrej Palat opened the scoring for the Lightning just before the nine minute mark of the opening period and the lead held through the rest of the first and a good chunk of the second half before Palat doubled his goal tally as well as the Lightning’s lead to make it 2-0 with 7:31 to go in the middle period. Victor Hedman pushed the lead to 3-0 for Tampa on the power play with just under two minutes to go in the second frame but Boston would get on the board with a power play tally of their own from Jake DeBrusk at the 7:04 mark of the 3rd period. That’s as close as Boston would get the rest of the way as the Lightning slammed the door shut on the B’s down the stretch, locking up the win and the 3-1 lead that went with it.

I have to think that the Bruins aren’t just going to roll over and let the Lightning have this series but I also expect the Lightning to make Boston earn it if that’s truly the case. I think this is another grind it out style of game and I think once again, we’ll be lucky to see four goals so give me the under in this one but my stronger play is on the side and I have that available as a premium pick that you can find here.