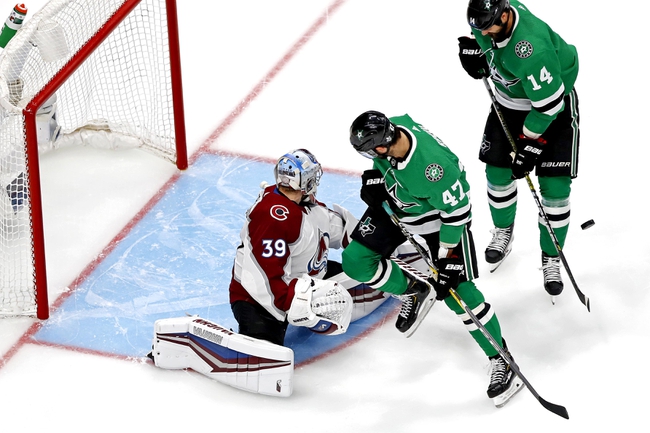 The Colorado Avalanche and the Dallas Stars meet in game four of their best-of-seven Western Conference semi-final matchup from Rogers Place on Sunday.

The Colorado Avalanche will look to even up the series at two wins apiece after getting on the board in the series with a 6-4 win over the Stars in game three.

Tyler Seguin opened the scoring for Dallas just after the midway point of the opening period and the lead held until Nikita Zadorov tied the game at one for Colorado at the one minute mark of the second period. Andre Burakovsky pushed the lead to 2-1 just 3:41 later and Gabriel Landeskog made it 3-1 Avs with nine minutes to go in the middle frame. Colorado’s lead held into the third, where Denis Gurianov pulled a goal back for Dallas just before the five minute mark of the 3rd and Blake Comeau tied things up at three just 4:20 after that. Jamie Benn made it 4-3 Stars 1:45 after the tying goal but Mikko Rantanen would tie things up at four with a goal 1:15 after Dallas took the lead. Nazem Kadri gave Colorado the lead for good 1:52 later and Pierre-Edouard Bellemare added an insurance goal for the Avs on an empty net to secure the win and get Colorado in the win column in the series.

Pavel Francouz got the win in goal after stopping 33 of 37 shots faced in the winning effort while Anton Khudobin ended up with the loss for Dallas after giving up five goals on 31 shots in defeat in goal.

I was leaning towards the Avalanche here as they had the momentum of getting on the board in the series with game three’s win, but then the postponement happened and the Stars had an extra day to stew on some questionable gameplay and tactics from the Avalanche in that game. I still think we see a physical game but I’m also expecting some scoring here and with the total creeping up, I’m going to go with it and side with the over in this contest.