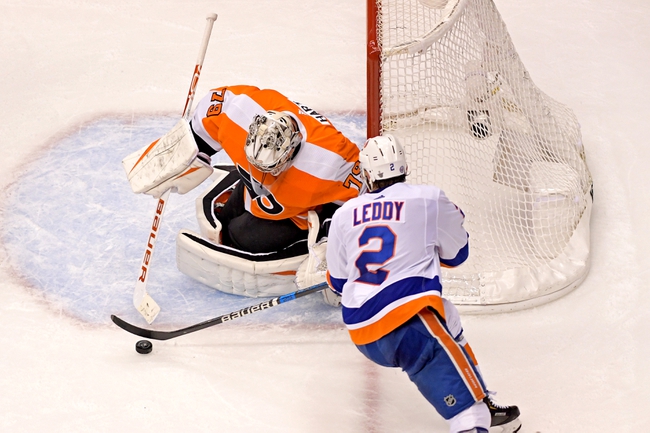 The Philadelphia Flyers and the New York Islanders meet in game three of their best-of-seven Eastern Conference semi-final matchup in NHL action from Scotiabank Arena on Thursday night.

The Philadelphia Flyers will look to build off of a 4-3 overtime win over the Islanders on Wednesday to tie the series up at one win apiece.

The first period was all Philadelphia, as Kevin Hayes gave Philly the lead just 1:57 into the game before Hayes doubled his goal tally as well as the Flyers lead just before the midway point of the opening period. Sean Couturier pushed the lead to 3-0 for the Flyers with just under five minutes to go in the opening period, but the Isles would come alive in the second when Anders Lee would get the Islanders on the board with just over eight minutes to play in the second period. Anthony Beauvillier cut the deficit to 3-2 just after the midway point of the 3rd and Jean-Gabriel Pageau tied the game at three for New York with just over two minutes to play in regulation, forcing overtime at the end of the 3rd period. The extra frame lasted all of 2:41 before Philippe Myers ended things with the winner for the Flyers to get Philadelphia on the board in the series. Carter Hart got the win after stopping 31 of 34 shots faced in the victory for Philadelphia in goal while Thomas Greiss took the loss in net for New York after allowing one goal on 21 shots faced in relief of Semyon Varlamov who was pulled earlier in the game.

It may have taken overtime, but the total finished over the number for the second time in as many games in this series and I think we’re starting to see the goaltending slow down just a little bit. The two sides are still defensive masters in the postseason, but the offenses have come to play as well. I think if we’re going to keep getting these lines of 5, until they get bumped you gotta keep riding the over as these two teams are just scoring for fun while bumping each other all around the ice. Give me the over in this one.