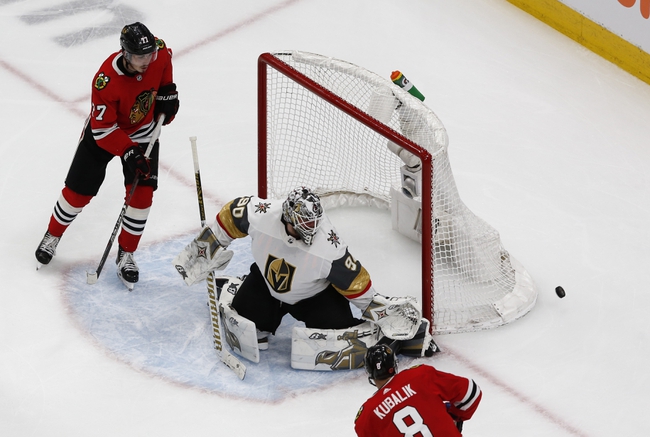 The Chicago Blackhawks and the Vegas Golden Knights meet in game five of their best-of-seven Western Conference quarter-final series in NHL action from Rogers Place on Tuesday.

The Chicago Blackhawks will try to live to fight for one more day after taking game four by a count of 3-1, bringing the series to 3-1 in favor of Vegas.

Drake Caggiula opened the scoring for Chicago just over four minutes into the game before Matthew Highmore doubled Chicago’s lead with just over six minutes to go in the opening frame but Shea Theodore would pull one back for Vegas just :18 later. The 2-1 score held through the rest of the first, all of the second and most of the 3rd period before Alex DeBrincat iced the win for the Blackhawks with an empty net goal with just :11 to go, getting a win on the board for Chicago at the final buzzer.

Corey Crawford got the win for Chicago in net after stopping 48 of 49 shots faced in the victory while Robin Lehner took the loss for Vegas, his first L of the postseason at 4-1 after allowing two goals on 24 shots in defeat.

We’re starting to see desperation from Vegas now, as Chicago has some momentum after staving off elimination in game four. The problem is I don’t know if Chicago has enough in the tank to carry that over three more times. On the other side, Vegas has been balanced but I think the Golden Knights crank up the pressure here to make sure they’re not the first team to make the mistake here. I think a lower-scoring, tight and physical game is on the cards here, so give me the under in this one.