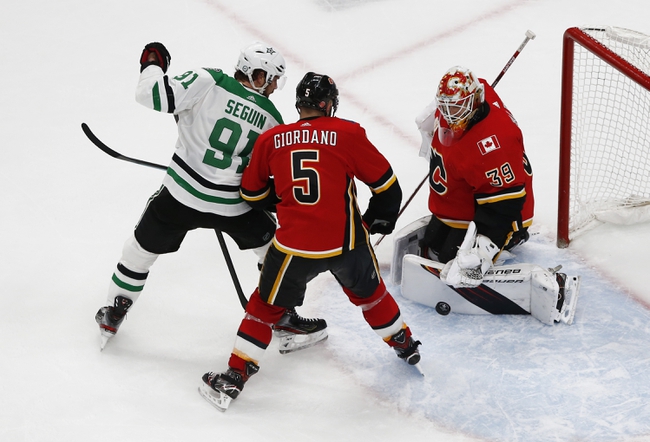 The Calgary Flames and the Dallas Stars meet in game five of their best-of-seven Western Conference quarter-final series from Rogers Place in NHL action on Tuesday.

The Calgary Flames will try to rebound after a frustrating loss in game four to even the series up at two wins apiece as Dallas emerged victorious in overtime by a final score of 5-4.

Joe Pavelski opened the scoring for the Stars with less than two minutes to go in the first period, but things broke open in the second. Johnny Gaudreau tied the game at one for Calgary just 1:54 into the second period but Pavelski would restore Dallas’ lead with his second goal of the game 1:20 later. Sam Bennett tied the game at two :43 after that, and Bennett gave Calgary a 3-2 lead with just over five minutes to go in the middle frame. Denis Gurianov tied things at three for Dallas in the final minute of the second period, but Tobias Rieder barely wasted time, restoring Calgary’s lead 3:11 into the 3rd period with the Flames short-handed. The Flames almost held on for the win, but Pavelski would complete his hat-trick and tie the game at four with :12 to go in regulation and Alex Radulov would complete the comeback for the Starts with just under four minutes to go in the first overtime period.

Anton Khudobin got the win in goal for Dallas after stopping 36 of 40 shots faced in the win while Cam Talbot took the loss for Calgary despite stopping a whopping 57 of 62 shots faced in defeat.

No pun intended, but I got burned by the Flames in game four after a call that you could argue was offside going into the zone for the tying goal, but we can’t go back. As far as this one goes, I’m still not sold on Anton Khudobin in goal for the Stars and I think the Flames know the opportunity they let slip away in game four, and Calgary won’t let it happen again here. Give me Calgary and the plus money to take a 3-2 lead in the series.