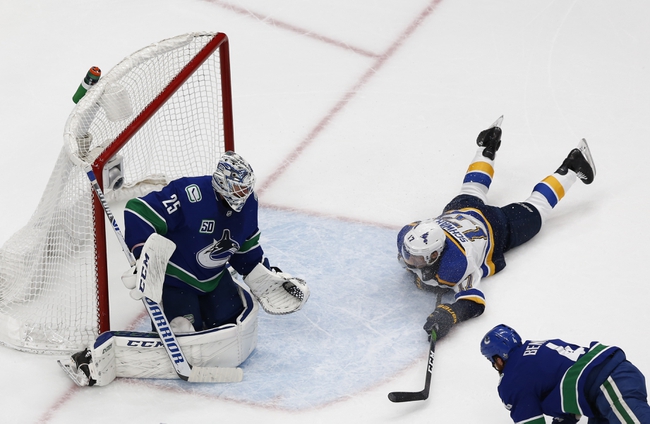 The St. Louis Blues and the Vancouver Canucks meet in game four of their best-of-seven Western Conference quarter-final series in NHL action from Rogers Place on Monday night.

The St. Louis Blues will try to even the series up at two wins apiece after grabbing their first win of the postseason with a 3-2 OT win over Vancouver to make the series 2-1 in favor of the Canucks.

The first period saw no scoring, but things broke wide open in the second period when J.T. Miller opened the scoring for Vancouver on the power play just 1:19 into the period. Justin Faulk tied the game at one for St. Louis around the eight-minute mark and David Perron pushed the Blues in front 2-1 with just under two minutes to go in the second. That lead lasted all of 37 seconds though before Elias Pettersson tied things at two for the Canucks. The third period saw no scoring as well, so it was off to OT where Brayden Schenn capitalied on an errant pass from Vancouver, wristing the shot over Jacob Markstrom’s shoulder and into the top corner on the breakaway to give St. Louis the win and to get the Blues on the board in the series.

Jake Allen got the win in goal for St. Louis after stopping 39 of the 41 shots he faced in the win while Markstrom took the loss in net for the Canucks despite stopping 46 of 49 shots faced in defeat.

I’m not sure who the Blues start for this game, whether Allen has enough in the tank to go back-to-back or you put Jordan Binnington back in goal. One thing is for sure though, is that the Blues have all of the momentum right now and that’s very dangerous with a veteran team like St. Louis who are also the defending champions. If Allen goes, he’s already been solid for St. Louis up to this point and if Binnington goes, well the Blues have the confidence to carry him if he’s still shaky and Binnington himself may feed off of that confidence. The Canucks are a young team that’s handled the postseason pressure well, but this kind of opposition in this situation is a whole different animal. I’ll back the Blues here on the ML