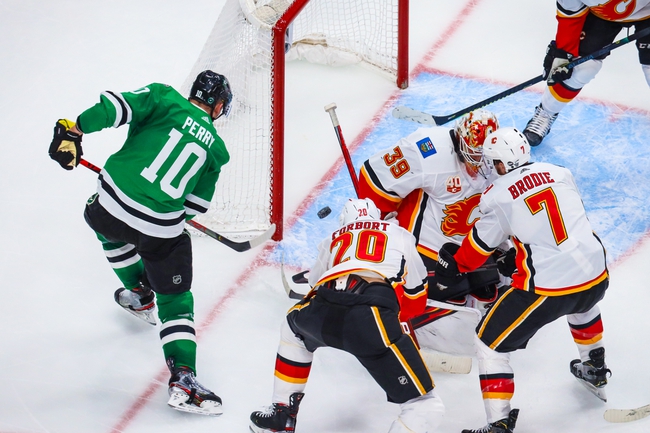 The Calgary Flames and the Dallas Stars meet in game three of their best-of-seven Western Conference quarter-final matchup from Rogers Place on Friday night.

The Calgary Flames will look to bounce back and retake the series lead after a heartbreaking 5-4 loss to the Stars in game two. Dillon Dube opened the scoring for the Flames just :19 into the game before Alex Radulov tied the game at one for Dallas just 2:23 after that. Miro Heiskanen made it 2-1 Stars just after the midway point of the opening frame. Heiskanen would double his tally and push Dallas’ lead to 3-1 just under five minutes into the second frame. Derek Forbort would pull one back for Calgary with seven minutes to go in the second. Corey Perry would restore the two goal cushion with just under five minutes to go in the second, but Tobias Rieder would pull one back to make it 4-3 with just under eight minutes to go. Sam Bennett would help Calgary complete the comeback, tying the game at four with less than three minutes to go. The comeback was all for naught though, as Jamie Oleksiak would score the winning goal for Dallas, with just 40 seconds to go, and the Flames just wouldn’t have a late response, allowing Dallas to hold on and even the series up at one win apiece.

I liked the Flames at the beginning of the series and I would’ve loved them in game two had they won Thursday’s game. However, Dallas sucked the win out with less than a minute to go, and on a back-to-back, that kind of win can have a lasting effect of energy on the Stars while Calgary will have issues regrouping and getting in the right head space. I’ll side with Dallas to pick up the win and a 2-1 series lead here.