The New York Islanders and the Florida Panthers meet in game three of their best-of-five qualifying round series from Scotiabank Arena on Wednesday afternoon.

The New York Islanders will look to complete the sweep after taking the first two games of the series, including a 4-2 win in game three on Tuesday over the Panthers.

Mike Hoffman opened the scoring for Florida with the lone goal of the opening period before Matt Martin tied the game at one just over six minutes into the second period. Alexksander Barkov restored Florida’s lead just 1:44 later, but Ryan Pulock would tie the game at two for the Isles with just over six minutes to go in the middle frame. Jordan Eberle gave New York their first lead less than three minutes later before adding an insurance goal just after the midway point of the 3rd period. Florida would pressure late, but New York would hold on for the win to push the Islanders to the brink.

Semyon Varlamov got the win after stopping 26 of 28 shots faced in the winning effort while Sergei Bobrovsky ended up with the loss, falling to 0-2 in the postseason after giving up four goals on 34 shots in defeat.

I’ve said before that the Islanders style lends itself to a tougher, grittier style of hockey game and that’s still true. But we saw the offensive side of the Isles show up on Tuesday, and with how the Panthers have been unable to keep the puck out of the net combined with the offensive skill that Florida still has, this total seems low. I’ll side with the over as my free pick for this game but my stronger play is on the side and I have that as a premium pick that you can find here. 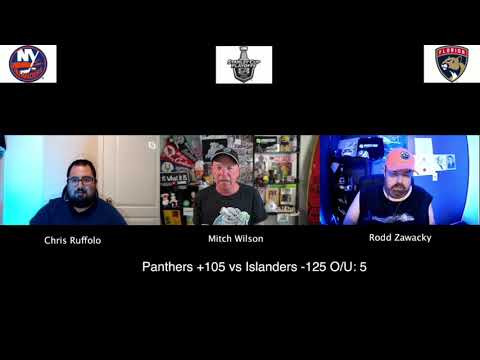