The Winnipeg Jets and the Calgary Flames meet in game one of their best-of-five qualifying round series from Rogers Place in NHL action on Saturday night.

The Winnipeg Jets come into the playoffs as the #9 seed in the Western Conference with a record of 37-28-6, 80 points and a point percentage of .563 this season. The playoff berth made it three straight playoff appearances for the Jets, who will be hoping to make it out of the first round for just the second time since returning to Winnipeg in 2011-12. Mark Scheifele and Kyle Connor are tied for the team-high with 73 points on the year, with Scheifele boasting a team-high 44 assists while Connor led the Jets in goal scoring with 38 goals this season. Patrik Laine had 28 goals with 35 assists while Blake Wheeler has 65 points with 43 assists. Connor Hellebuyck leads the Jets in goal, boasting a record of 31-21-5 with a 2.57 GAA and .922 save percentage this season.

The Calgary Flames on the other hand enter the playoffs in 8th place with a record of 36-27-7 and 79 points with a point percentage of .564 this season. The playoff spot marked the fourth year in six seasons that the Flames participated in the Stanley Cup playoffs. Matthew Tkachuk leads Calgary with 61 points with 23 goals and 38 assists while Johnny Gaudreau has a team-high 40 assists as part of his 58-point season and Elias Lindholm has a team-high 29 goals as part of his 54-point season for Calgary this year. David Rittich and Cam Talbot split the goaltending duties, with Rittich seeing the bulk of the action with a record of 24-17-6 with a 2.97 GAA and .907 save percentage while Talbot went 12-10-1 with a 2.63 GAA and .919 save percentage this season.

This series is probably the hardest to call, as the two teams met just once in the regular season and it was an outdoor game, so it makes next to no sense to try to analyze that result. However, we’re getting better odds with the Jets and Connor Hellebuyck who is one of the premier goalies in the NHL. Hellebuyck posted a 2.57 GAA despite tying for the league lead with 58 games played this season which is a testament to how solid he is between the pipes. I just think the two sides cancel each other out in most facets and I like Hellebuyck in goal for Winnipeg more than I do David Rittich or Cam Talbot for Calgary, so I’ll take the Jets to draw first blood here. 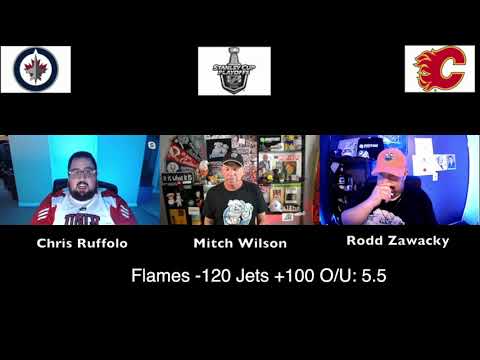