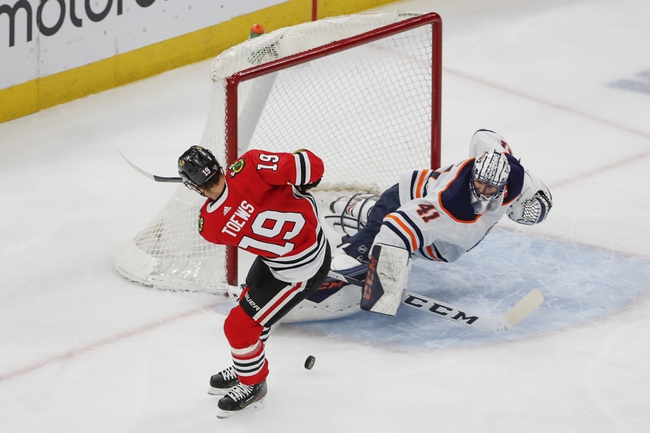 Where to Watch: Sportsnet, NBC Stream live sports and exclusive originals on ESPN+. Sign up now!

The Chicago Blackhawks and the Edmonton Oilers meet in game one of their best-of-five qualifying round series from Rogers Place on Saturday afternoon.

The Chicago Blackhawks enter the playoffs as the #12 seed in the West, catching a break as the modified playoff format bailed the Blackhawks out, who were sitting on 32-30-8 with 72 points and a points percentage of .514. It’s the usual cast of characters for the Blackhawks, who are making their first playoff appearance in three years and are hoping to make it out of the first round for the first time since winning the Stanley Cup back in 2014-15. Patrick Kane led the Hawks with 84 points including a team-high 33 goals and 51 assists while Jonathan Toews had 60 points with 42 assists this season. Dominik Kubalik is also up for the Calder trophy as the NHL’s top rookie after finishing second on the team with 30 goals this season. The big question mark here is can the goaltending keep up, as Corey Crawford has experience in bunches, but he had a down year with a record of 16-20-2 and only was forced back into a starting role when the Blackhawks surprisingly traded Robin Lehner to the Vegas Golden Knights. Malcolm Subban is also a candidate in goal with a 9-7-3 record this season.

The Edmonton Oilers come into the playoffs as the Western Conference’s #5 seed, finishing with a record of 37-25-9 for 83 points and a points percentage of .585 this season. It was a two man show for much of the season for Edmonton, who are making just their second playoff appearance since reaching the cup finals in 2005-06. Leon Draisaitl has probably the strongest case to win the Hart Trophy as the league MVP as well as the Ted Lindsay award for the MVP as voted on by the players with 110 points this season, including team-highs of 43 goals and 67 assists. Connor McDavid wasn’t far behind with 34 goals and 63 assists for his 97 points and Ryan Nugent-Hopkins had 22 goals and 39 assists to finish with 61 points, 3rd on the team in that regard. Mikko Koskinen and Mike Smith provide the two-headed monster for the Oilers in goal with Koskinen sporting an 18-13-3 record while Smith went 19-12-6 in the regular season.

Anything can happen in these qualifying round, and this is one of the series that a lot of people have on upset alert given Chicago’s playoff experience at the core with Kane and Toews. With that said, I still question Chicago’s average at-best goaltending and if they can hold their own, but Koskinen and Smith (whoever starts) have each had their share of blow-ups as well this season. I can see this being the highest scoring qualifying series in either conference, so I’ll side with the over as my free pick for this game but I have a stronger play on the side that you can find here.