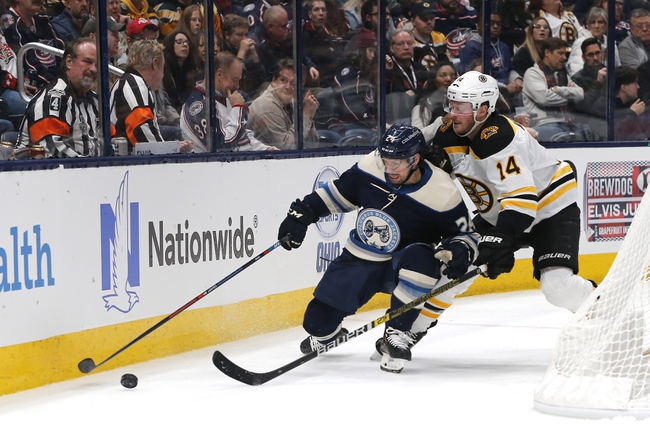 The Boston Bruins and the Columbus Blue Jackets meet in an NHL preseason matchup from Scotiabank Arena on Thursday night.

The Boston Bruins come into the bubble as the President’s trophy winners, parked on the century mark, 100 points, with a record of 44-14-12 with a points percentage of .714. Boston came out of the gate on fire, posting an 18-3-5 record through the first two months of the season and not taking their first regulation loss at home until December 7th. The Bruins cooled off a bit in December and January before going on an 11-3 run in February and the B’s followed that up with a 3-1 record in March before the NHL was forced to pause due to the Coronavirus pandemic. When the league halted, David Pastrnak led the Bruins with 95 points, with a team-high 48 goals along with 47 assists, 20 power play goals and 38 power play points. Brad Marchand had 87 points with 28 goals and a team-high 59 assists with 28 power play points while Patrice Bergeron had 31 goals, 11 power play goals and 20 power play points. Tuukka Rask saw the bulk of the workload in goal for the B’s, posting a 26-8-6 record with a 2.12 GAA and a .929 save percentage while Jaroslav Halak had a 2.39 GAA and .919 save percentage.

The Columbus Blue Jackets on the other hand, benefitted from the adjusted playoff format, entering the playoffs in 9th on 81 points with a record of 33-22-15 and a points percentage of .579 this season. The Blue Jackets started out the season tough, and they would barely play .500 hockey for the first three months of the season. Columbus would come in on fire in January, posting a 9-2 record that month, but would revert to old habits, going 4-5-6 in February. Pierre-Luc Dubois led the Jackets in points with 49 points as well as a team-high 31 assists while also logging 10 power play points. Zach Werenski has 20 goals and 21 assists with a team-high 5 power play goals and 13 power play points. Elvis Merzlikins and Joonas Korpisalo split time in goal for Columbus, with Merzlikins going 13-9-8 with a 2.35 GAA and a .923 save percentage while Joonas Korpisalo had a 2.60 GAA and .911 save percentage this season.

This is a tough one to call as Boston’s the better team but Columbus beat the Bruins twice in as many games earlier this year. With that said, I think that the Blue Jackets have more to lose by going full tilt in the warmup game as the Jackets have a series with the Maple Leafs on the horizon while Boston’s playing in the top-4 round robin to determine seeding. I also trust the tandem of Halak and Rask in goal if they share minutes than I do Korpisalo and Merzlikins, so I’ll side with Boston to pick up the win here.

Chris’s Pick Boston Bruins (Will Update With Odds Once Released)

Get Premium Picks Start Winning Now »
The pick in this article is the opinion of the writer, not a PickDawgz site consensus.
Previous Pick
Nashville Predators vs. Dallas Stars - 7/30/20 NHL Pick and Prediction
Next Pick
New York Rangers at Carolina Hurricanes - 8/1/20 NHL Picks and Prediction