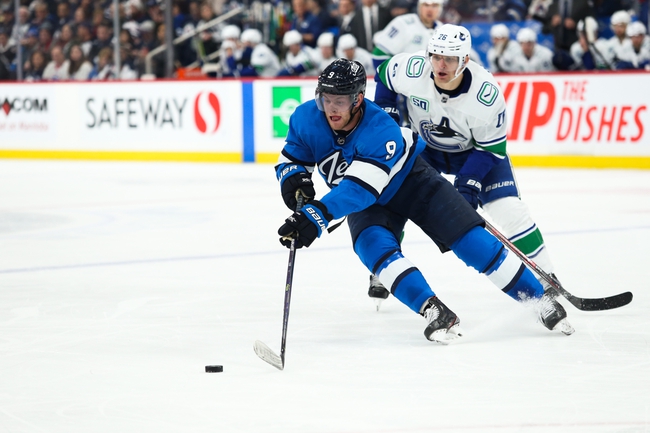 The Vancouver Canucks and the Winnipeg Jets meet in an NHL exhibition matchup from Rogers Place on Wednesday night.

The Vancouver Canucks come into the bubble as the #7 seed in the West with 78 points and a record of 36-27-6 with a point percentage of .565. The Canucks got off to a quick start in Ocrober with an 8-3-1 record but sort of fell back to Earth in November. The Canucks went through December and January with a record of 16-8, but went just 7-9-2 from the start of February to mid-March when the NHL was forced to halt due to COVID-19. When the league stopped, J.T. Miller led the Canucks with 72 points including a share of the team-high with 25 power play points and 45 assists while sharing the team-high in goals with 27 goals. Elias Pettersson had 66 points with 27 goals and 39 assists and 24 power play points. Bo Horvat and Quinn Hughes each had 53 points with Hughes adding a team-high 45 assists and 25 power play points of his own. Jacob Markstrom saw the bulk of the action in goal with a 23-16-4 record and a 2.75 GAA with a .918 save percentage while Thatcher Demko posted a record of 25-13-2 with a 3.06 GAA and .905 save percentage.

The Winnipeg Jets on the other hand, enter the bubble as the Western Conference’s #9 seed, sitting on 80 points with a record of 37-28-6 and a point percentage of .563. Winnipeg got off to a decent start before rattling off a 10-3-1 mark in the month of November. The Jets were average at best from that point on, as they went .500 or worse in each of the next three months before going 4-0-0 in March before the NHL paused. Kyle Connor and Mark Sheifele tied for the team-high with 73 points, with Connor leading the ‘Peg in scoring with 38 goals while Scheifele has a team-high 44 assists. Blake Wheeler has 65 points with 43 assists while Patrik Laine has 63 points with 28 goals and 35 assists and Nikolaj Ehlers has 58 points with 25 goals and 33 assists. Connor Hellebuyck saw the bulk of the action in goal for Winnipeg with a 31-21-5 record and a 2.57 GAA with a .922 save percentage.

There’s a lot of talent on both sides here and the exhibition game lends itself to a sloppier game and potentially more offense. However, the two meetings between these two teams in the regular season saw a combined nine goals, and while we know the offense is there for both sides, I think defense will be the focus, so I’ll back the under as I could see this one also hitting five goals or less.