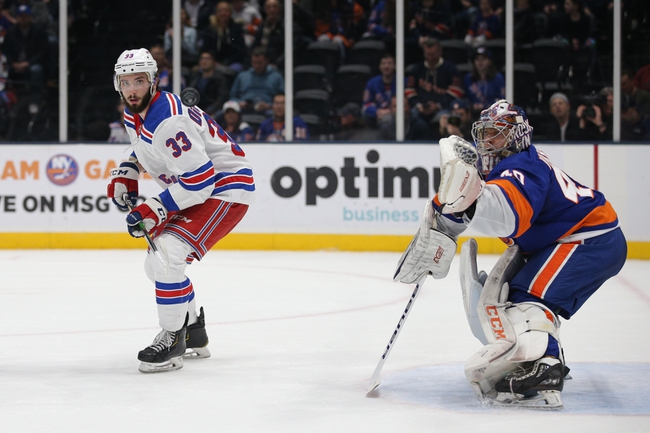 The New York Rangers and the New York Islanders meet in an NHL exhibition game from Scotiabank Arena on Wednesday night.

The New York Rangers enter the bubble as the #11 seed in the Eastern Conference, sitting on 79 points with a record of 37-28-5 and a points percentage of .564 this season. The Rangers were up and down for much of the season, starting with an average October and then picking up points in 11 of 15 games in November. A pair of average months in December and January left the Rangers looking for answers, and they found their answer in goaltender Igor Shesterkin, who helped spurn the Rangers on an 11-4 run in February with wins in 8 of 9 road games. The Rangers were making a push for the playoffs when the league paused in mid-March due to the Coronavirus pandemic, but the modified format gave the Rangers a playoff berth for the first time since 2016-17. When the league paused, Artemi Panarin led the Rangers with 95 points, including a team-high 63 assists with 24 power play points, while Mika Zibanejad had 75 points with a team-high 41 goals and 15 power play goals and 27 power play points. Shesterkin had a 2.52 GAA and .932 save percentage across his 12 starts while Henrik Lundqvist and Alexandar Georgiev split the load otherwise, with Georgiev posting a 17-14-2 record with 3.04 GAA and .910 save percentage while Lundqvist had a 10-12-3 record with a 3.16 GAA and .905 save percentage.

The New York Islanders on the other hand, come into the bubble as the Eastern Conference’s #7 seed, finishing the year with a record of 35-23-10 on 80 points and a point percentage of .588. The Isles had a strong start to the year, posting a 17-5-2 record at the start of December, and a 25-10-3 mark heading into the new year. However, a slower start in January and a bad second half of February combined with the four games in March saw the Isles sliding down the stretch, backing into the playoffs. The Isles lost 11 of their last 13 games prior to the league pause, so maybe the break came at just the right time for New York. When the NHL went on hiatus, Mathew Barzal led the Isles with 60 points, including a team-high 41 assists with 12 power play points. Brock Nelson wasn’t far behind with a team-high 26 goals and 28 assists this season. Semyon Varlamov and Thomas Greiss split the workload for New York in goal, with Varlamov posting a 19-14-6 record with a 2.62 GAA and .914 save percentage while Greiss had a 2.74 GAA and .913 save percentage.

These two teams were going in two different directions going into the hiatus, and while the break may have given the Islanders a chance to clear their heads, I need to see that the Islanders have broken out of their slump before backing them, even in an exhibition. The Rangers took three of four from the Islanders this season, and I think they have the edge in the crease with Shesterkin and either Georgiev or Lundqvist. I’ll side with the Rangers to pick up the win here.