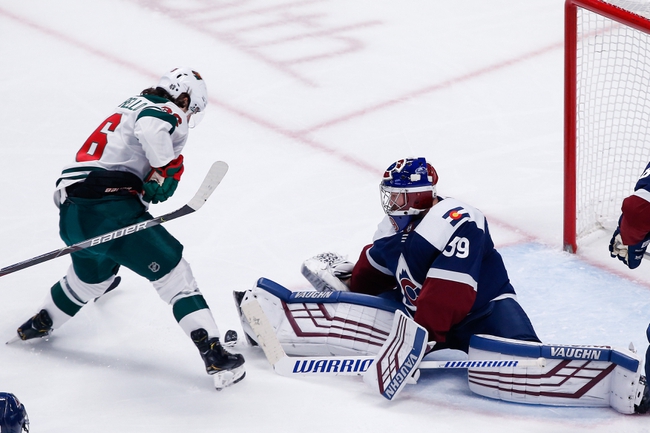 The Colorado Avalanche and the Minnesota Wild meet in an NHL preseason game from Rogers Place on Wednesday afternoon.

The Colorado Avalanche come into the bubble as the #2 seed in the Western Conference, sitting on 92 points with a record of 42-20-8 and a points percentage of .657. Colorado got off to a strong start, sitting with a record of 16-8-2 after the first two months of the season and followed that up with a slow December and January before an 11-3-1 run in February. The league would halt play in the middle of March, and at that point, Nathan MacKinnon far and away led the Avs with 93 points, posting team-highs of 35 goals, 58 assists with 12 power play goals and 31 power play points. Pavel Francouz and Philipp Grubauer split the workload in goal for Colorado, with Francouz posting a 21-7-4 record with a 2.41 GAA and .923 save percentage while Grubauer went 18-12-4 with a 2.63 GAA and .916 save percentage.

The Minnesota Wild on the other hand, are one of the teams that benefitted from the adjusted playoff format as the #10 seed with a record of 35-27-7, 77 points and a points percentage of .558 this season. The Wild went through their share of ups and downs throughout the season, with then-head coach Bruce Boudreau being fired on February 14th. The Wild then rattled off wins in 5 of their last 7 and 8 of their last 12 before the league was forced to pause, but the Wild were still a ways out from a playoff spot at that point so the new format may have saved Minnesota’s season at least for a couple more weeks. Kevin Fiala leads Minnesota with 54 points, including 23 goals and 31 assists while also being one of three Minnesota players with 18 power play points this season. Ryan Suter has a team-high 40 assists while Eric Stall has 47 points with 19 goals and 28 assists. Zach Parise has a team-high 25 goals as well as a team-leading 12 power play goals this season. Alex Stalock and Devan Dubnyk split time in goal, with Stalock posting a 20-11-4 mark with a 2.67 GAA and .910 save percentage while Dubnyk went 12-15-2 with a 3.35 GAA and .890 save percentage this season.

These two teams played the regular season about as even as it gets, with each side having two wins and each side having one 3-2 win this season. With that said, I feel like the Wild are on borrowed time here and I just don’t like the goaltending that Minnesota has compared to what Colorado brings to the table. Colorado is also the better team side-by-side in my opinion, so I’ll back Colorado to pick up the win in this one.