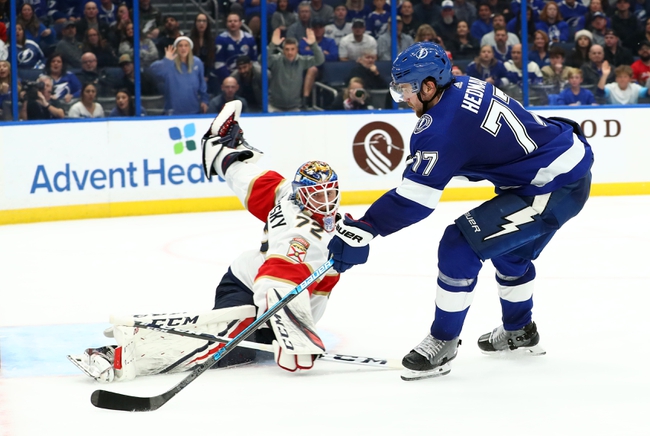 The Tampa Bay Lightning and the Florida Panthers meet in an NHL preseason matchup from Scotiabank Arena on Wednesday afternoon.

The Tampa Bay Lightning come into the bubble as the 2nd-best team in the Eastern Conference on 92 points with a record of 43-21-6 and a points percentage of .657. Tampa Bay got off to a slow start with a .500 record after the first two months of the season, but the Bolts would turn things on in December, posting a 9-4-1 record then in January, Tampa Bay would get 21 of a possible 26 points. February was kind to the Lightning as well with a 10-4 record before the league was forced to pause in mid-March due to the Coronavirus pandemic. Nikita Kucherov led the Bolts with 85 points including ateam-highs of 33 goals, 52 assists and 25 power play points. Steven Stamkos had 66 points with 29 goals, 37 assists and a team-leading 10 power play goals and Brayden Point wasn’t far off with 64 points with 39 assists. Andrei Vasilevskiy was once again one of the NHL’s best goaltenders, posting a 35-14-3 record with a 2.56 GAA and .917 save percentage in the regular season.

The Florida Panthers on the other hand, benefitted from the adjusted playoff format for this season, sitting with the 10th spot in the East and a record of 35-26-8 for 78 points and a points percentage of .565. The adjusted playoff format helped Florida secure their first playoff berth since 2015-16. Florida stayed the course for much of the season with .500 records or below in each of the first three months before rattling off an 8-2 run in January to make a run at a playoff spot. The problem is that the Cats followed that up with a 5-9-2 February and fell back in the hunt. When the league stopped mid-March, Jonathan Huberdeau led the Panthers with 78 points, including 23 goals and a team-high 55 assists while also leading Florida with 29 power play points. Aleksander Barkov had 62 points while Mike Hoffman had a team-high 29 goals and Evgenii Dadonov had 25 goals with Hoffman and Dadonov each owning a team-high 11 power play goals this season. Sergei Bobrovsky saw the bulk of the goaltending duties with a 3.23 GAA, a .900 save percentage and a 23-19-6 record on the year.

I’d like to give the Panthers a shot here with it being an exhibition/warmup game to get ready for the next round, and the Panthers need the tune-up with the Islanders on deck. However, the Lightning, even after a hiatus are the far better team here, and have won three of four meetings with Florida already this season, with two of the three wins coming by three or more goals. I’ll side with Tampa Bay on the puck line to avoid paying hefty juice when the line comes out.