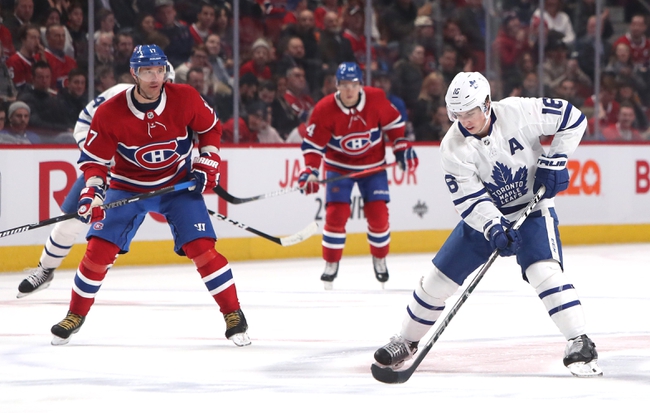 The Toronto Maple Leafs and the Montreal Canadiens meet in an NHL preseason matchup from the Scotiabank Arena on Tuesday night.

The Toronto Maple Leafs enter the bubble as the 8th place team in the Eastern Conference, sitting on 81 points with a record of 36-25-9 and a points percentage of .579, tied with the Columbus Blue Jackets, the same team that the Maple Leafs are matched up with in the qualifying round starting next week. The season started with optimism after John Tavares was named the 25th captain in team history, filling a position that was left vacant after Toronto traded Dion Phaneuf to Ottawa in 2016. Auston Matthews, Mitch Marner and Morgan Reilly were all named alternate captains as a result. The Leafs got out to a 9-5-3 start, but a six game losing streak saw Toronto part ways with Mike Babcock and bring in Marlies coach Sheldon Keefe as his replacement. The Leafs seemed rejuvenated under their new coach, logging 19 of a possible 26 points in December and sitting in a playoff spot for much of the season after Keefe’s arrival and appointment as coach. Auston Matthews leads Toronto in a lot of stat categories, with team-highs of 47 goals, 80 points, 12 power play goals and 25 power play points while Mitch Marner leads Toronto in assists with 51 helpers this season. Frederik Andersen started 52 games in goal for Toronto, posting a 29-13-7 record with a 2.85 goals against average and a .909 save percentage this season.

The Montreal Canadiens on the other hand, benefitted from the adjusted playoff format as the 12th place team in the Eastern Conference, sneaking in with a 31-31-9 record on 71 points with a .500 points percentage. Like Toronto, there was a lot of optimism in La Belle Province under Claude Julien as the young core of Max Domi, Phillip Danault and Brendan Gallagher were paying dividends as well as Tomas Tatar coming in to lead Montreal’s scoring attack. However the Habs never really found their footing as October was the only month where they finished with a monthly record above .500.Montreal had two separate eight game losing streaks as well as a poorly-timed five game skid after rattling off 9 wins in 12 games from January 11th to February 8th. The Habs entered the pause on a three game losing streak, with their playoff chances looking slim, but the new format gave the Habs a life preserver to carry on into the postseason. Tomas Tatar leads Montreal with 61 points and 39 assists while being tied with Brendan Gallagher for the team lead in scoring with 22 goals this season. Carey Price saw the bulk of the work in goal, posting a 27-25-6 record with a 2.79 GAA and a .909 save percentage.

This is one of the NHL’s oldest rivalries and even in a warmup game it should be fun to watch. With that said, Toronto hasn’t had the most success against Montreal recently, but I do like Toronto’s offensive firepower compared to Montreal’s. The Habs have a slightly better defense and Carey Price is always capable of standing on his head, but I think the Leafs’ offense gets warmed up here so I’ll back Toronto to pick up the win here.