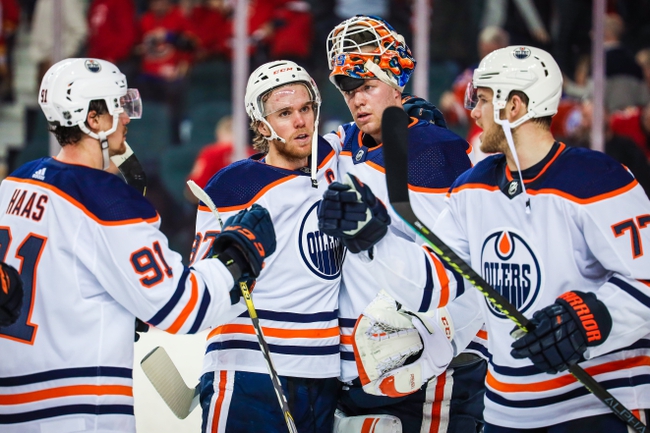 The Battle of Alberta takes on a new form on Tuesday night as the Flames look to shake off the rust of the stoppage with a win against their bitter rivals as both teams get prepared for what they hope is a lengthy playoff run. The Flames are 36-27-7 coming into the return to action and finished as the 8th seed in the Western Conference which has them slated for a first round date with the Winnipeg Jets. Calgary was a minus-5 in terms of total goals for and against this season which is very uncharacteristic for a playoff team in any season and especially for a Flames side who usually is pretty sound on the blue line. The Over is 3-0-1 in the last 4 meetings between these two sides and Calgary is 7-3 in the last 10 against the Oilers but these are obviously very different times and trends have to be taken with a grain of salt.

The Oilers meanwhile locked up the 5th seed in the Western Conference and have a first round matchup against the Chicago Blackhawks who were starting to get hot as league action came to a halt. Edmonton has the league’s best power play which operates at just under 30% which makes sense considering the offensive fire power they have led by Leon Draisaitl who is nominated for the Hart Trophy this season, and of course Connor McDavid who is considered by most to be the best player in the NHL. Edmonton will need to stay out of the penalty box though as they don’t have a great special teams on that side of the equation and the Flames can make them pay with a strong power play unit of their own.

The return to action preseason is going to be tough to handicap but one thing that won’t change between these two is the tenacity and physicality which will lead to unavoidable penalties. With that being considered, look for this one to go over the number whether it comes out at 5.5 or 6 goals.

Get Premium Picks Start Winning Now »
The pick in this article is the opinion of the writer, not a PickDawgz site consensus.
Previous Pick
Toronto Maple Leafs vs. Montreal Canadiens - 7/28/20 NHL Prediction and Picks
Next Pick
Chicago Blackhawks at St. Louis Blues - 7/29/20 NHL Pick and Prediction