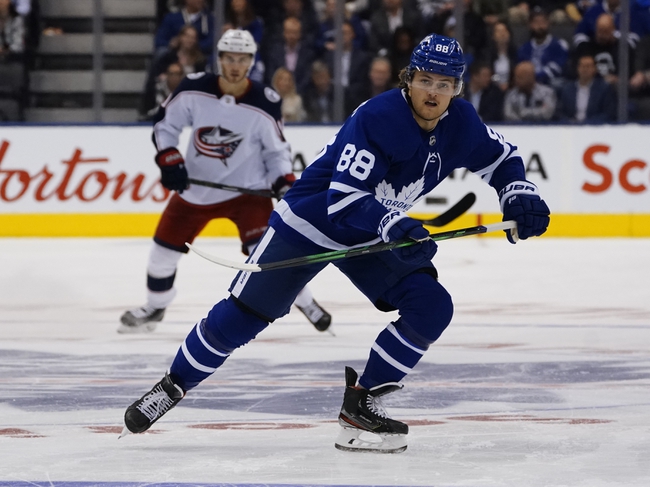 The Toronto Maple Leafs and the Columbus Blue Jackets meet in a qualifying round best-of-5 series in the NHL once play resumes. Let’s take a look at the two sides going into the series. Bet This NHL Series Here

The Toronto Maple Leafs come into the playoffs with the #8 seed with a record of 36-25-9 and a points percentage of .579 this season. This marks the 4th straight playoff appearance for Toronto, but Toronto will be looking to make it out of the first round for the first time since 2003-04. Auston Matthews led Toronto with 80 points in the regular season, including a team-high 47 goals while Mitch Marner had 67 points with a team-high 51 assists. Frederik Andersen saw the bulk of the workload in goal for Toronto, posting a record of 29-13-7 with a 2.85 GAA and .909 save percentage this season.

The Columbus Blue Jackets enter the postseason as the #9 seed, finishing the year with a 33-22-15 record, and an equal .579 points percentage this season. The playoff berth marks the 4th straight season that Columbus made it to the postseason. Pierre-Luc Dubois led the Blue Jackers with 49 points this season, including a team-high 31 assists while Oliver Bjorkstrand had a team-high 21 goals in just 49 games in the regular season. Joonas Korpisalo and Elvis Merzlikins split the workload in goal for Columbus, with Korpisalo posting a record of 19-12-5 with a 2.60 GAA and .911 save percentage while Merzlikins posted a mark of 13-9-8 with a 2.35 goals against average and a .923 save percentage this season.

A lot of people are giving Columbus an edge as the Blue Jackets finally look healthy after being banged up for much of the year. I mean Columbus lost 419 man games when the league stopped on March 12th, by far the most in the NHL. However, while Columbus may be healthy, Toronto is as talented as they come, and I just like Frederik Andersen more than I like either Elvis Merzlikins or Joonas Korpisalo for Columbus. I think the playoff experience bodes well for Andersen and Toronto here, and maybe avoiding a top team in the opening round may give the Leafs the momentum they’ll need to make a run in the postseason. I’ll side with Toronto for the series win here. Bet This NHL Series Here