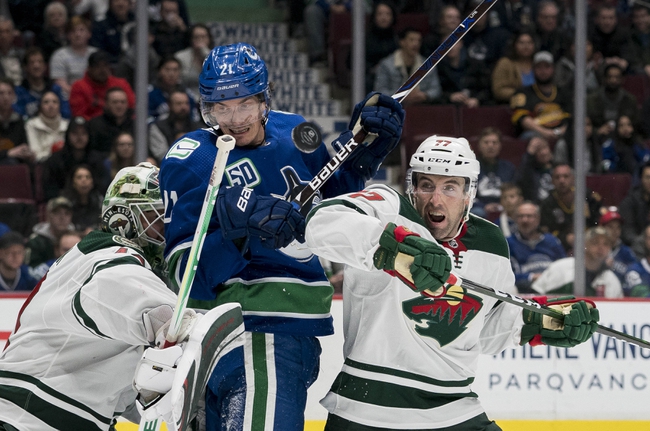 The Minnesota Wild will be taking on the Vancouver Canucks in a 1st round 2020 Playoff Series.  Minnesota ended the 2020 season with an overall record of (35-27-7), while Vacouver finished with a record of (36-27-6).  Let’s take a closer look at each organization and what they did during the regular season. Bet This NHL Series Here

The season started out rough for the Wild, as fans thought it would be a long season in Minneapolis, MN.  The Wild started 1-6 and gave up at least 4 goals in all 6 losses.  However, Minnesota turned the tide and had a stretch where the organization won 7 of 9.  Minnesota ended the regular season, winning 6 of their last 8.  The Wild were led by Kevin Fiala.  Fiala had a team leading 54 points, with 23 being goals.  Ryan Suter did his part while on defense, as he dished out 40 assists in 69 games.  Zach Parise led the team in goals with 25.  Parise was even better on the power play, as he collected 12 of his 25 goals in those situations.  Alex Stalock looks to be the guy that will be between the pipes, as the goaltender finished the regular season with a record of 20-11-4, while allowing 2.67 goals per game.  The Wild finished 6th place in the Central Division.

Vancouver ended the season with a win, beating the New York Islander 5-4 in a shootout, but overall the Canucks lost 5 of 7 to close out the season.  The Canucks had a 7 and 5 game win streak throughout the 2020 season, which helped Vancouver end the season still 9 games above the .500 mark.  The offense was paced by center J.T. Miller.  Miller totaled 72 points through 69 games, which was a team high for the organization this year.  Miller also tied a team high in goals with 27, as Elias Pettersson also netted 27 goals.  Quinn Hughes collected 45 assists out of his total 53 points.  Bo Horvat contributed 12 power play goals. Vancouver will more than likely place goaltender Jacob Markstrom between the pipes for the series.  Markstrom finished 2020 with a record of 23-16-4, while allowing 2.75 goals per contest.  The Canucks finished 4th place in the Pacific Division.

Overview:  The Canucks have opened as favorites for this series.   The Wild won the season series 2-1, as Minnesota won the season series finale between the two, 4-3 in a shootout.  Both teams scored 9 goals during the 3 game series.  The Canucks finished 9th in goals per game, averaging 3.25, while the Wild netted an average of 3.16.  This series has the potential to be high scoring, as each team ranks in the bottom 11 of goals allowed per game.  Vancouver has scored the 3rd most power play goals during 2020.

I look for the Canucks to take advantage of some miscues by the Wild, which will help keep this series close.  However, I’m going to side with the Minnesota Wild, as the Wild played in the best division inside the Western Conference.  The Wild will do enough in this 2020 Playoff Series to make it to the next round. Bet This NHL Series Here