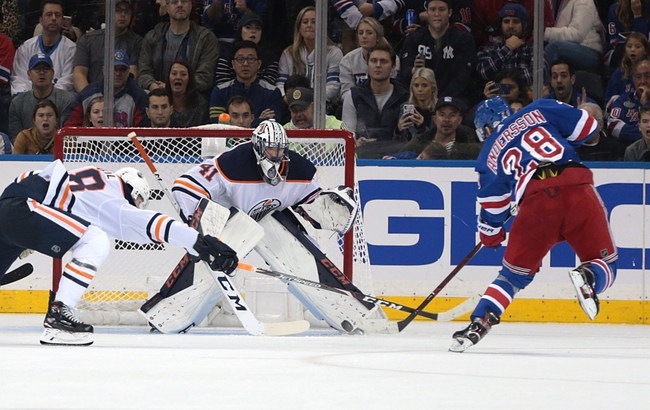 The New York Rangers and the Edmonton Oilers meet in NHL action from Rogers Place on Tuesday night.

The New York Rangers will look to build on back-to-back wins after a 5-4 overtime win over Toronto in their last outing. Brett Howden opened the scoring for New York just 1:41 into the game before Toronto tied the game at one on the power play 2:40 later. Dylan Strome would restore the Rangers’ lead just 3:38 after that to help New York carry a 2-1 lead into the 2nd before adding another to make it 3-1 early in the 2nd. Toronto would pull a goal back just 3:11 after that before Mika Zibanejad restored the two-goal lead for New York by the end of the 2nd period. Toronto would pull one back early in the 3rd before tying the game with less than a minute to play, sending us to OT where Tony DeAngelo potted the winner to give the Rangers the extra point and a hard-fought victory. Alexandar Georgiev got the win to improve to 10-7-1 on the year after stopping 44 of 48 shots faced in the winning effort.

The Edmonton Oilers will be out to rebound from back-to-back losses after a 5-1 loss to the rival Calgary Flames in the battle of Alberta last time out. Calgary opened the scoring just :!1 into the game before doubling the lead just after the midway point of the opening period. Connor McDavid pulled one back for Edmonton just 2:47 later, but the Oilers wouldn’t get any closer as Calgary struck twice more in the 2nd and added a short-handed marker early in the 3rd to put the game out of reach despite the Flames outshooting Edmonton 31-29 in the game. Mikko Koskinen took the loss, giving up four goals on 24 shots faced before being pulled in the 2nd period.

I get Edmonton being favored because they’re at home, but the Oilers aren’t playing good hockey right now, losing eight of their last ten games coming into this one. New York continues to get no respect despite playing some pretty decent hockey on the road and did just beat a pretty good Toronto team in their own building last time out. I’ll take a shot with New York and the plus money here.